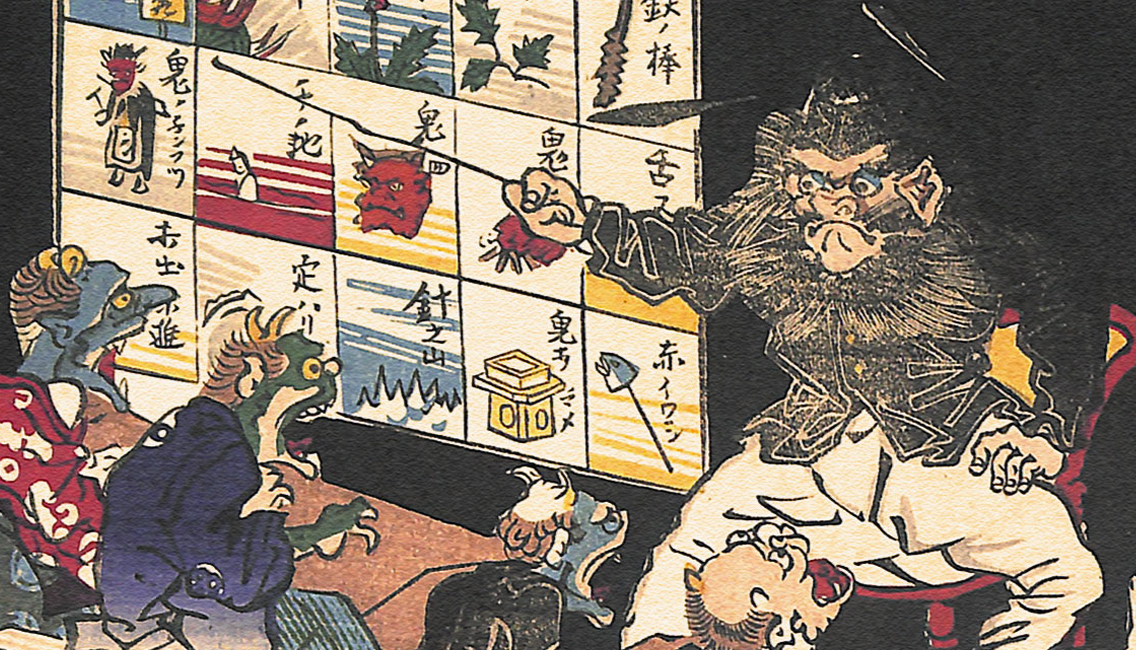 In a classroom full of demons, we can see a desk that has sprouted legs, some umbrellas that walk around of their own accord and a large gate that has come to life and now strikes terror into the hearts of monsters. It's a bizarre sight. Explained in words and, it sounds horrifying; seen in this picture, and it is an odd, playful and strangely amusing scene. What is this image about, and what is it trying to tell us? Is there a message here amid the chaos? How can we learn more about where this illustration came from?

To answer these questions, we must travel back in time to nineteenth century Japan. In our last essay on this website, we examined the huge changes that were taking place during this time in England. In Japan, things were changing at an even more intense pace. For more than two hundred years, the country had secluded itself from the outside world. From the late 1630s, it had closed nearly all of its ports and the country was governed by a strict military oligarchy. These rulers were known as the Tokugawa shogunate, and they ruled from Edo Castle in the city of Edo (present-day Tokyo). For this reason, the period is known as the Edo period (1603–1868).

Through this feudal system, Japan had immense prosperity, and many people enjoyed a broad range of artistic and cultural pursuits. While its strict social order did not allow people in-or-out of the country, the period brought peace and stability. It was an era that lasted for several decades, and it can be characterised as a time of immense sustainability and self-sufficiency.

Yet, by the beginning of the nineteenth century, things began to change. The events that led to the fall of Edo in 1868 are long and complex but suffice it to say, these events brought a massive wave of transformation. Following the Meiji Restoration of 1868, Japan was restored to a state of imperial rule under Emperor Meiji (1867–1912), and a new era was born. Ports were opened, and Japan began to transform itself into a modern state. In this restoration, they looked to the West for inspiration and studied Western political, economic and social forms.

It's during this period that we meet our illustrator Kawanabe Kyōsai (1831–1889). Known by the nickname 'the demon of painting' (shuchu gaki), Kyōsai was born in 1831 and would have witnessed Japan's transformation from a feudal country into a modern state. As a boy, he spent a short time working with the great ukiyo-e artist Utagawa Kuniyoshi (who is also featured on this website). He then studied at the Kanō school but quickly abandoned his training when he discovered that the school placed far too much importance on technical skills and did not encourage artists to explore their own imaginations.

Kyōsai was a man rich in imagination. He produced a huge output of work that covered everything from books and scrolls to paintings and kabuki theatre designs. These works were always uniquely his own, and he happily played with different techniques, subjects, styles and traditions. Of all of these outputs, he is best known for his woodblock prints. These days, such prints are treated as precious works of art, but — originally — they were a populist art form. Most people could afford to purchase them, and artists and illustrators like Kyōsai were keen to meet that demand.

Kyōsai was an eccentric genius who had a reputation as a heavy drinker with a reckless spirit. During the Meiji Restoration, he earned a name as a caricaturist, and he often was arrested for his disruptive behaviour. It is recorded that he often assaulted fellow artists and, in 1870, he spent some time in prison for his abusive depictions of western visitors.

Actively anti-establishment, Kyōsai took issue with the Westernisation of Japan. In the eyes of the West, the country was a crude and barbaric society and the elite classes of the time were eager to adapt to more Victorian tastes. Art was censored, brothels were closed, and peasant life was considered primitive. Kyōsai's response to this was to embrace these crudities and celebrate the qualities that the West disliked. One of the best examples of this can be seen in Hōhi Gassen (1867) – a large scroll that depicts an epic fart battle.

By the 1870s, Kyōsai was producing lots of work. He was immensely popular, and his images depicting demons were in high demand. In these works, monsters seem to spill out from his drink-addled mind directly onto the page. His mythical creatures act like surrogates to his mischievous nature. They embrace excess, they run amok, and they often ape the behaviour of humans. In much of these drawings, we can see a direct link between his disobedient demons and the reckless Japanese that he liked to celebrate.

Kyōsai loved to satirise current affairs and he was always keen to confront the Empire's pro-Western ideologies. In many ways, he is emblematic of what good satire is. He manages to take a challenging or unpalatable idea and propagate it through humour and great imagery.

One such idea can be seen in his criticism of the Meiji government's education system. This educational reform took many years to agree upon but, in 1872, the government finally passed an Education Act. This made school attendance compulsory, and the act was also strongly inspired by education methods that were being used at the same time in the West. Kyōsai had always been a rebel. He took issue with compulsory education — for farm families, it added a huge burden to daily life. He also saw that the act learned heavily on western leanings. He reacted by producing the School for Spooks (Bake-Bake Gakkō). The work not only mocks the government's decision but also does so in a uniquely Japanese way.

In it, Kyōsai appropriates imagery from Japanese folklore. We have Shōki, a vanquisher of ghosts, taking on the role of the headteacher. A great mythical figure in Chinese and Japanese culture, Shōki is reputedly able to command eighty-thousand demons. Here, Kyōsai gives him the humiliating task of trying to command a classroom full of oni demons who are learning to read words in both Chinese and Japanese. To add insult to injury, he's dressed in rather humiliating-looking western clothes and forced to sit in an uncomfortable western chair.

Below this scene, we have a second collection of students. Like the oni, these kappa demons are also learning words from their mythical worlds, but this time they are learning to read through romanised Japanese. If universal education was compulsory for all, then the supernatural world would also have to attend.

In this illustration, we can also see that a number of inanimate objects have come alive. School desks and western-style umbrellas have eyes and legs as if to either suggest that perhaps the West is equally demonic or that these objects have the power to overrun Japan completely independently.

At the very bottom of the work, we can see some goblins that are being blown away from the school by Fūjin, the Wind God. Perhaps Kyōsai is trying to say that the wind is the only thing that can't be caught and forced into education? Or, maybe, Fūjin blows inwards, dragging these unwilling goblins into the school?

It's a great illustration and it's made all the better by Kyōsai desire to satirise this Western encroachment in a very Eastern way.

Despite all his satire, Kyōsai was not dogmatically opposed to some of these new ideas. In the book Inexorable Modernity: Japan's Grappling with Modernity in the Arts, Brenda G. Jordan is quick to point out that Kyōsai was not overtly opposed to the West. He had many Western friends; he sported a Western-style haircut and even worked as an illustrator on early Meiji textbooks for use in grade schools and middle schools. He was willing to participate in the modernisation of Japan but he also wanted to ensure that his voice was heard. Work like this was a way of making sure that these concerns were addressed.

By creating these types of images Kyōsai went on to be recognised as the first political caricaturist of Japan. Much like his life, his work was wild and impassioned. Described by the art historian Timothy Clark as "perhaps the last virtuoso in traditional Japanese painting", Kyōsai was a unique talent. Today his illustrations shine through with an exuberance, and energy unlike anything else and they mark him out as one of the finest illustrators in the history of Japan.

Utagawa Kuniyoshi
When Kyōsai was only six when he studied under Utagawa Kuniyoshi (1797–1861). Kuniyoshi was one of the last great masters of the Japanese ukiyo-e style of woodblock prints. He was also obsessed with cats! Read an essay about his work here.

Takashi Murakami
The highly prolific artist Murakami (b 1962) often parodies and satirises popular Japanese culture and society through his work. Striking a perfect balance between high and low art, his anime-esque artworks merge dark themes with a childlike sense of wonder.