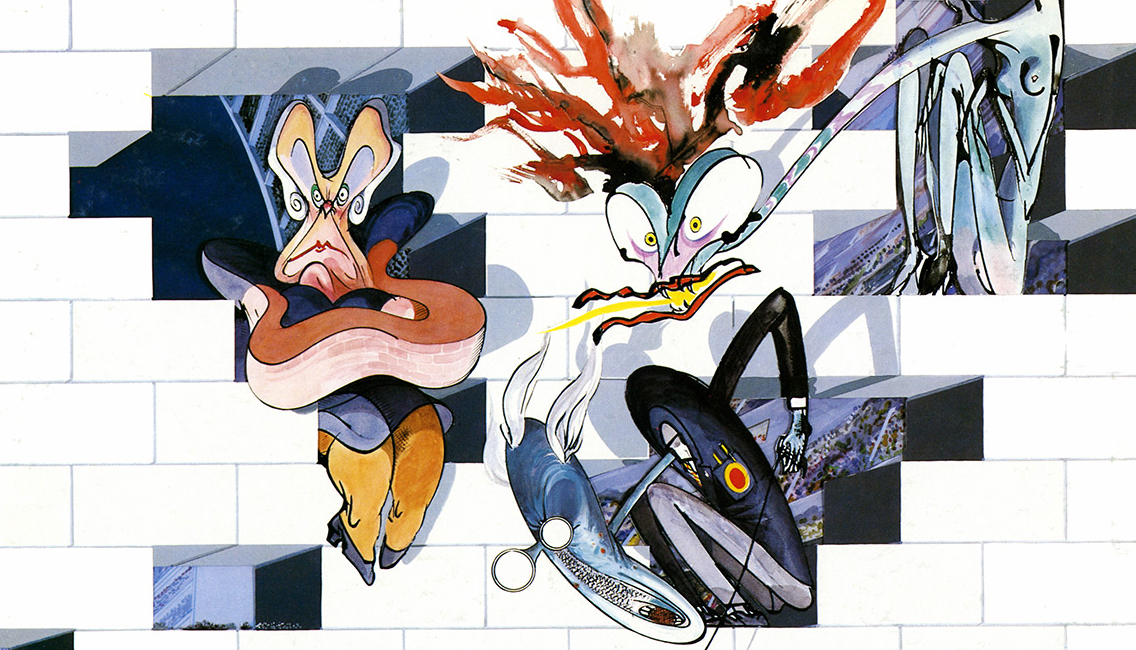 How Gerald Scarfe and Pink Floyd Built ‘The Wall’

In 1971 the English illustrator Gerald Scarfe (b. 1936) found himself in LA creating an animated film for the BBC. He had spent the previous decade producing editorial cartoons and caricatures for British publications like Punch, the Daily Mail and The Sunday Times – and was now taking his satirical eye to the States. It was an era of drugs and cynicism, and Scarfe channelled these elements into his work. The resulting animation was Long Drawn-Out Trip, a warped visual stream of consciousness that reflected the illustrator’s take on American culture. It was trippy and hallucinogenic, mixing together everything from John Wayne and Micky Mouse; to commercials and Playboy. Scarfe’s take on American society was relentlessly engaging, and its unique style seemed to strike a chord with viewers.

The following year it was seen by the members of Pink Floyd, and they loved it. They were eager to work with someone on visuals, and so they asked the illustrator if he might be interested. Scarfe – who admitted he was originally “no means a fan” of the band – went to see them perform The Dark Side of the Moon at Finsbury Park. When he saw their performance, his attitude completely changed. He loved the theatricality of their live act and agreed to see if they could find some projects to work on together.

After collaborating on tour programs, stage animations and a music video, Scarfe and the band finally landed on The Wall. Devised by Roger Waters, it was to be a hugely inventive album. Waters had already written three concept albums in the form of the group’s previous LPs – The Dark Side of the Moon (1973), Wish You Were Here (1975) and Animals (1977) – but this was to be his most personal and revealing album to date. It featured songs about isolation and abandonment and was an exploration of darkness and humanity. Scarfe was the perfect person to visualise these themes, and Waters wanted him involved from the very beginning.

“In the early days, Roger explained the whole of the music and lyrics of The Wall to me,” Scarfe wrote in his 2011 book. “Over the following weeks he retraced his steps, telling me which part of The Wall echoed his own life – his father’s death, his girlfriend’s infidelity etc., which was fantasy and what was fact. Gradually I built up a picture of what I felt I could contribute.”

Telling the journey of a character called Pink, Scarfe visualised his life as a twisted mix of elegance and horror. At the core of the story was the titular wall: a defensive barrier that Pink constructed to close himself off from a cruel world. Through Water's songs, we get to learn about the death of Pink’s father during World War II; we learn how his mother domineered him; how his school bullied him; the government controlled him; and how his wife betrayed him. Scarfe brought all these elements to life with an ink-spattered flick of the wrist. This grotesque cast of characters would go on to become iconic figures in the landscape of pop culture.

The Wall was released as a double album in 1979, but Waters had already envisioned it to be more than just an LP. From 1980–81, the band toured with a hugely ambitious live show. During the course of their performances, a massive thirty-five-foot wall of white cardboard bricks was constructed on stage and onto this was projected animations by Scarfe. The band also worked with the architect Mark Fisher and the mechanical engineer Jonathan Park to turn Scarfe’s original illustrations into massive inflatable puppets that represented characters from the story. These included the "Mother", the "Ex-wife" and the "Schoolmaster". Even today, The Wall Tour remains one of the most ambitious and complex theatrical events ever attempted.

One person whose attention had been caught by the show was the director Alan Parker: “It probably marked the high point of rock-and-roll theatre” he said, “I couldn’t imagine anything ever getting any bigger.” Parker had been a Pink Floyd fan since before The Wall, but the themes of this album really spoke to him. He approached EMI and asked if he could adapt it into a live-action film. Waters had himself already had the intention of turning the album into a film, and – when he heard that Parker was interested in an adaptation – he asked the director if he would consider taking the role. The process of getting it to screen was a challenge for everyone involved. Parker, Waters and Scarfe repeatedly clashed during its production, and Parker later described the ordeal as: “one of the most miserable experiences of [his] creative life.”

Despite the difficulties, The Wall (1982) was regarded by many critics as a success and it was praised for its unique and often horrifying depiction of self-destruction. As the film’s designer and animator, Scarfe’s distinctive illustrations came to life on screen, and these brought his work to a much wider audience. Throughout the film, Scarfe drew and animated a number of key animated sequences that featured disturbing and surreal images of violence, sex and gore. Over time the film established cult status and, alongside the album and tour, The Wall is now regarded as one of the most iconic and inventive projects in the history of rock.

Sadly, while Scarfe and Waters were collaborating on The Wall, relationships within the band were at an all-time low. The illustrator had worked with the group for six years and, during that time, he had been caught in the middle of one of rock's most bitter break-ups. The Wall would be Water’s penultimate album with the group, and many would argue that it was the band’s last great release.

Despite the difficulties and challenges during Scarfe’s collaboration, what they created together was one of the most iconic and imaginative combinations of visuals and music ever undertaken. Within the history of music, it remains to be a groundbreaking work. The same can certainly be said too about its achievements within the history of illustration.

Derek Riggs and Iron Maiden
A few weeks after Pink Floyd released The Wall, the British heavy metal band Iron Maiden teamed with the artist Derek Riggs (b. 1958) to create their mascot 'Eddie the Head'. Eddie has appeared on almost all of the band's albums and single covers, as well as in their live shows.