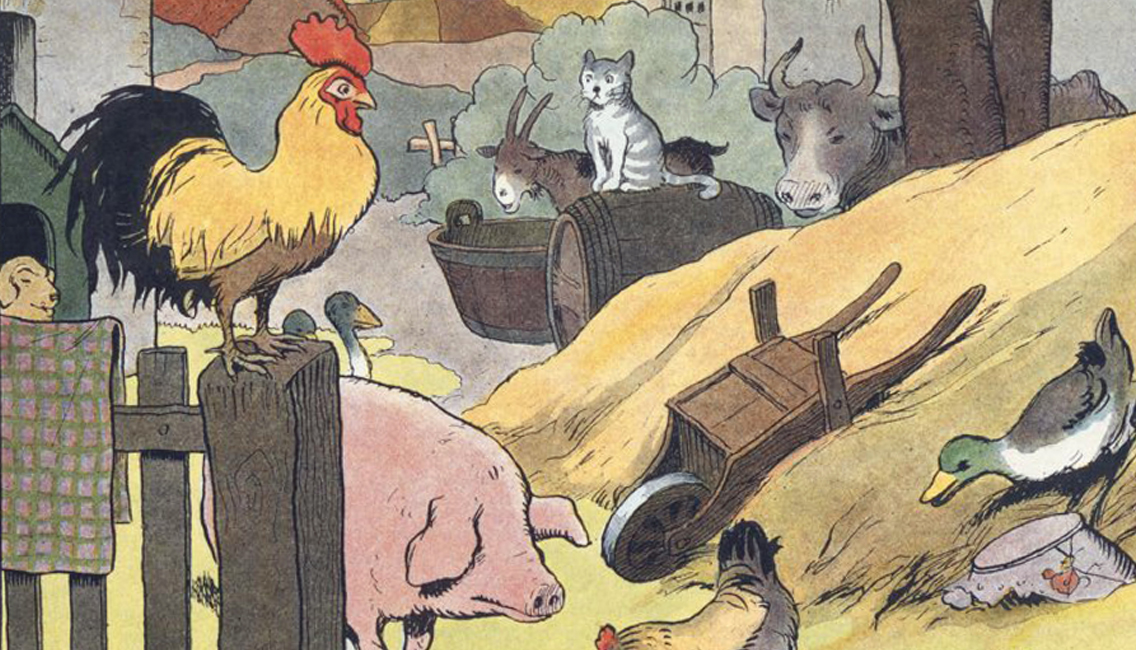 The year is 1913, and we find ourselves in France. It is here that we meet Benjamin Rabier (1864–1939). He's forty-eight years of age, and he has just completed work on one of his most impressive titles – an adaptation of Comte de Buffon's magnum opus Histoire Naturelle (1749–1804). It is one of the happiest periods of the talented French illustrator's life.

For him, this project must have felt like the perfect fit. Buffon’s thirty-six-volume encyclopaedia had been published initially in the eighteenth century, and it had quickly become a hugely celebrated work. At the time of its publication, it brought a more practical and secular approach to our understanding of the natural world. Featuring detailed descriptions of each species – it was richly illustrated, and included numerous accounts of each species' way of life. Rabier's adaptation was published under the name Le Buffon de Benjamin Rabier, and it provided him with the perfect opportunity to continue exploring and developing his passion for drawing animals.

That said, the production of the book was certainly a mammoth undertaking. Filled with over nine hundred illustrations, it took almost three years to complete. Despite the size of the project, Rabier was no doubt in his element. He approached everything with almost scientific rigour and, within its pages, we can find some of his finest work. Upon its release, Le Buffon received a warm and enthusiastic welcome, and it helped Rabier expand on his reputation as one of the world's most skilled animal illustrators.

The work shown here demonstrates the illustrator's keen ability for creating images that are both clear and accessible. Rabier's talent lay in his ability to take an animal and capture it realistically. Despite this ability, he also never allowed for his technical skills to overshadow his ability to produce work that was also warm and inviting. For me, this really is no mean feat. The illustrations seen in Le Buffon are both informative and entertaining; he strikes a perfect balance that is ideally suited to educational illustration.

Rabier’s skill for creating such work helped him significantly in attracting many fans during his lifetime. Indeed, in the same year that Le Buffon was released, the illustrator was awarded the prestigious Legion of Honour. Receiving this type of recognition must have felt like a great achievement for the illustrator. Only three years before receiving it, he had been balancing his passion with a full-time job at night where he works as an inspector at Paris’ Les Halles food market.

In Marc Faye's terrific Rabier documentary The Man Who Made the Animals Laugh (2013), the illustrator's biographer, Olivier Calon, notes that “at night, [Rabier] worked in a highly structured world framed by a rigid hierarchy”. Yet, during the day, things were different: “He was an artist giving free rein to his imagination”. For Calon, these two worlds could not have been more different. “The adjective that might best characterise Benjamin Rabier,” he notes, “is paradoxical”.

Yet, despite this dual existence, Rabier somehow managed to be an incredibly prolific illustrator while still maintaining a twenty-year-long career at Les Halles. During this time, he published thousands of illustrations in newspapers and periodicals. He also created many books for children. One of his first big successes came in 1898 when he collaborated with Fred Isly on an illustrated album called Tintin Lutin. The titular character of this work bears more than a passing resemblance to Hergé’s iconic character, and Rabier’s influence was something that Hergé openly admitted.

Rabier’s work revolutionised the art of illustration. He was one of the first people to specialise in illustrated books for children, and a great number of these featured illustrated animals. He had a real gift for taking an animal and humanising it. He gave his creations human expressions and emotions, and he was one of the first illustrators to have animals feature as leading characters within his work.

Over the course of his lifetime, he created more than two-hundred-and-fifty titles for children. Some of these were adaptations of fables – such as his hugely popular version of Les fables de La Fontaine (1906) – while many others were unique creations all of his own. For those that grew up in France in the early twentieth century, Rabier’s illustrations formed a sizeable part of their world. His images appeared on pencil-cases; posters; and postcards; as well as on furniture; as dishware; and as toys.

A year after the success of Le Buffon, Rabier suddenly faced the grim uncertainty of the First World War. Despite the obvious challenges of the time, the illustrator managed to persevere and, during this time, he created the character of Flambeau. A literal 'dog of war' – this creation utilised Rabier's ability to use animals as a means to talk about people. Flambeau highlighted the absurdity of the war and combined black humour with heroic tales. By 1916, the small dog had become so successful that he featured in a number of early animated cartoons – made in collaboration with the father of modern animation Émile Cohl (1857–1938).

Yet despite Flambeau’s success, the illustrator's most iconic creation was still yet to come. During the war, Rabier had helped out an old acquaintance from his Les Halles days by painting a jovial cow on the side of a meat truck. This drawing got the nickname Wachkrie – a joke on the German Valkyries trucks and, also, a play on ‘La Vache qui rit’ (The Laughing Cow). The illustration caught the eye of a prominent cheese manufacturer named Léon Bel and, in 1923, he asked Rabier to recreate the image. Rabier's illustration would become the brand logo for Bel's processed cheese, and the popular Laughing Cow brand was born.

That same year, Rabier created one of his most beloved characters. It was a small duck with a long neck called Gédéon. Over the course of sixteen albums, Rabier's Gédéon lay the foundations for what many would define as the modern comic book. Rabier's lively illustrations took precedence over his text, and – in Gédéon – the illustrator had found a central hero that readers loved to follow. Each album saw the duck undertake strange and wonderful adventures with his farmyard friends. These books were a huge success and, between 1923 and 1939, Rabier produced a staggering sixteen titles.

Sadly on the 10th of October 1939, Benjamin Rabier passed away. He was seventy-fours years of age. Over the course of his lifetime, he had revolutionised the art of illustration and had greatly enriched the world of picturebooks. He had given the world Tintin Lutin, the Laughing Cow, Gédéon the Duck and plenty more. His career spanned more than forty years and, in that time, his style remained simple, effortless and instantly recognisable. To this day his influence continues to be seen in the world of picturebooks and his legacy can be found every time that an illustrated animal smiles.

Marc Faye’s terrific Benjamin Rabier documentary
In 2013 the French filmmaker Marc Faye made a terrific film about the life and work of Rabier. Called The Man Who Made the Animals Laugh, the film was a huge help when researching this piece, and I owe it a big acknowledgement. You can view a trailer for it here or get more information on Faye's own website.

The animal illustrations of Cecil Aldin
At roughly the same time that Rabier was producing work, the English illustrator Cecil Aldin (1870–1935) was also illustrating animals. His images of dogs were especially popular, and titles like The Rascal and Puppy Dogs' Tales continue to still be in print today.

C.B. Falls' ABC Book
Originally published in the 1920s, C.B. Falls' (1874–1960) animal book has become something of a classic. Featuring an A to Z of animals, each letter in the book is represented by a beautiful full-page colour woodcut illustration. It is a perfect title for those who are very young – or for those who simply love beautifully illustrated books.