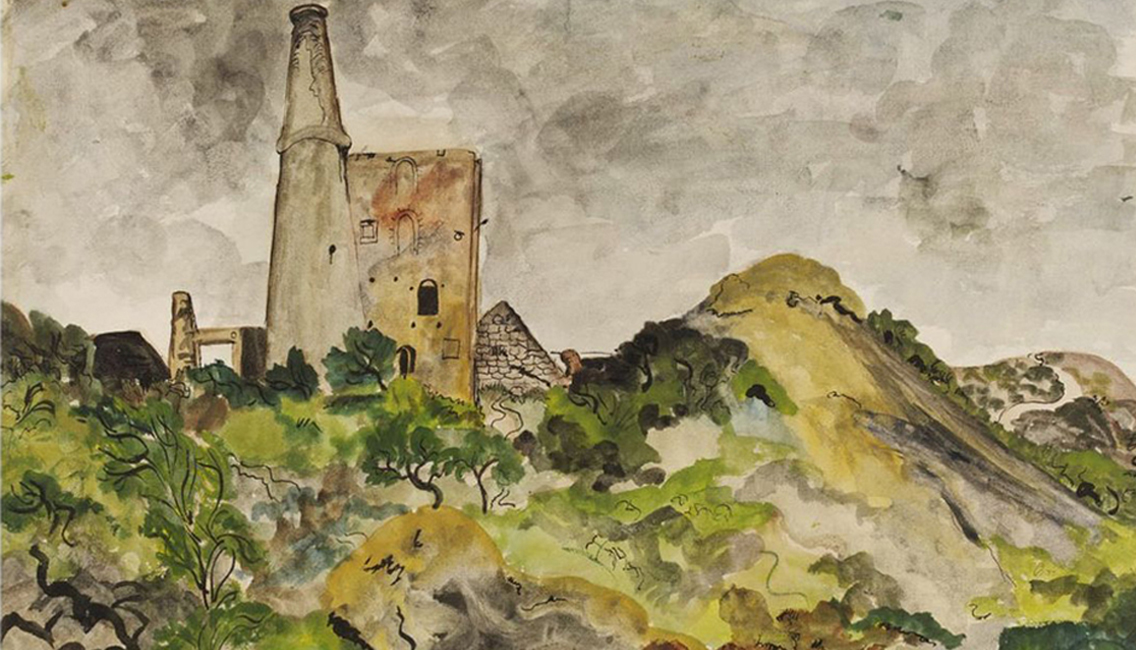 In early 1940 the threat of Nazi invasion hung heavy over Britain. War had been declared the previous September, and Western Europe found itself under an uneasy state of calm. “I need not tell you what terrible distress the war is causing among artists,” wrote the director of the National Gallery, Kenneth Clark, to Humbert Wolfe at the Ministry of Labour. “The situation is so serious that I have been wondering if it would not be desirable for the Government to take some action.”

Clark's suggestion was a new scheme that took inspiration from America’s Federal Art Project (1935–43). Yet, unlike the giant murals and large canvases of the American scheme – Clark suggested a more modest and, arguably, more British form of expression. He would employ artists and illustrators to produce topographical watercolours and drawings of the home front. The scheme was named 'Recording Britain', and it launched in 1940 with Clark viewing it as an extension of the Official War Artist scheme. With the imminent threat of German bombing and invasion, the importance of British life and heritage had come into sharp focus, and this scheme served as a valuable tool for ensuring that these qualities would be preserved as best they could.

“I love the war,” the artist and writer Olive Cook later remarked when reflecting upon the scheme. “It became very important to grow food. Agriculture flourished and people weren't moving about. I can't tell you how beautiful it was in the war. I love the war. It was idyllic.”

Cook was twenty-eight years of age and had worked as a supervisor for Clark when the National Gallery moved its collections to a slate mine in Wales for safe-keeping.

For her, the outbreak of war seemed to have transformed the country for the better. Cars no longer clogged the roads, and farming took on a renewed importance. The scheme’s somewhat vague brief meant that she had the freedom to spend her days cycling the countryside and seeking out pleasurable views. For a young female artist, this opportunity must have felt quite liberating.

With many male artists now either recording the war from the front line or fighting on it, the project supported a disproportionate number of female artists compared with other public art commissions from that era. 'Recording Britain' presented a unique opportunity for female artists that had not been there before.

Essentially, the scheme was an exercise in propaganda. 'Recording Britain' intended to boost national pride by celebrating the natural beauty of the country and by highlighting its rich architectural heritage. Even at the time of its creation, these images were already nostalgic; they encouraged people to value their own heritage, landscape and locality. These were the places that people were fighting for. The war might have been about protecting the iconic landmarks of picture-postcard Britain, but – it was also about protecting the beautiful mundanity of a disused tin mine in Cornwall or a modest row of houses at St John's Wood.

This sense of "Britishness" was not just limited to the scheme's subject matter. The topographical watercolour drawing was also seen as being uniquely British itself. Clark stipulated that all works should follow in this tradition, and so, nearly all of the scheme's 1,549 works, were produced in this form. Since the 1750s, the British have had a long-standing interest in depicting landscape through this medium, and Clark saw the scheme as an opportunity to continue the tradition.

While photography could have easily captured the look of these places, Clark felt that only drawing could truly show their spirit. He wanted to create a "sympathetic" record of Britain. “He also, quite presciently, I think, saw that watercolour was a dying art,” notes V&A curator Gill Saunders. “Watercolourists were under threat as much as the subjects they were trying to represent. For those reasons it turned into a fascinating snapshot of its time — both the art of its time and of the country at large.”

While the shadow of war gave the scheme a sense of pressing urgency, what truly drove the project forward was the recognition that progress itself could be just as destructive as conflict. Cities were expanding and pushing outwards while planners and developers were reshaping the land with buildings, housing estates and factories that spilt out into the countryside and penetrated the skyline.

The leading art critic Herbert Read once wrote about the aims of the scheme, and he outlined its underlying ethos: “... the existence of these drawings may serve to remind us that the real fight — the fight against all commercial vandalism and insensitive neglect — goes on all the time. There will be little point in saving England from the Nazis if we then deliver it to the jerry-builders and the development corporations.”

It is important to remember that the ideas of conservation and preservation were only in their infancy at this time. The National Trust were but a small organisation that had been around for less than fifty years. The Council for the Preservation of Rural England was founded in 1926. The Youth Hostels Association and the Ramblers' Association had emerged less than ten years before the war. This scheme fell very much into a small, but burgeoning, field that aimed to preserve and appreciate the traditional aspects of a country that was rapidly changing.

Looking at this work, any sense of rapid change is barely visible. These are images of resilience and continuity — pictures in the tradition of the war's Keep Calm and Carry On slogan. Only a handful of examples even hint that the country is at war. Phyllis Dimond's rendering of a London grocer and pub, for example (above), show windows that have been boarded against bomb damage; but, on the whole, the majority of these images strive to present a timeless record of the country.

For this reason, the vast majority of the artists involved in the scheme seemed to aim at showing a sense of continuity with the traditional topographic watercolourists of the eighteenth and nineteenth centuries. Here, we see few cars or pylons. There are no industrial chimneys or cranes. Perhaps, most surprisingly, there are very few depictions of people. While there are a handful of exceptions – Louisa Puller's scene from Malmesbury (below) – the majority of images in 'Recording Britain' typically present a desolate image of a nation. Throughout it all, a deep sense of melancholy hangs over this view of the country.

For the most part, the scheme presented a very singular image of national identity. This was a country of sentiment and tradition, where artists and illustrators showed an idealized account of a country at war. Somewhat revealingly, the scheme's name – 'Recording Britain' – was a misnomer, with the work covering only thirty-two counties in England and four in Wales. The scheme had a strong southern bias, and a separate scheme ran in Scotland.

The project employed both professional and amateur artists – many of whom have now faded into obscurity. Amongst them though are a handful of moderately big names: the artist John Piper (1903–1992), who later built a reputation for his uniquely modernist approach to the British landscape; Kenneth Rowntree (1915–1997), who was one of the Great Bardfield Artists; Enid Marx (1902–1998), the illustrator and designer who would go on to produce textile designs for the London Transport Board, and Barbara Jones (1912–1978), who produced several books and a number of large-scale murals.

Marx and Jones were particularly fascinated by English popular art, and both continued to document it well after the war – and this project – had ended. While the majority of artists in the scheme were influenced by the romantic topographic work of the 1800s, Marx and Jones seemed to be more interested in documenting the folk arts – or 'unsophisticated arts' – of Britain. From a painted plaster plaque on an old London tavern to an abandoned carousel horse at a yard in Norfolk (above), these images provide us with an insight into a Britain that vanished far quicker than the pastoral scenes shown throughout the majority of the collection. They might be less romantic scenes, but they present an important record of the aesthetic vernacular of a pre-war Britain.

When viewed as a whole, the work of 'Recording Britain' is far greater than the sum of its parts. It predominantly shows us an idealized account of the values and concerns of a people at war. The final effect is a poignant and occasionally haunting portrait of a country at a time of imminent change – and it enforces a belief that traditional rural life holds a redemptive quality that we risk losing forever.

The scheme ran from 1940 until 1943. On the one hand, its reliance on the traditional values of topographical watercolour seems to be reactionary to the uncertainty of war – a regressive final chapter written during a period of great instability. Yet, it could also be viewed as the beginning of a new chapter. The scheme arose at a time when people were beginning to truly recognise the importance of preserving our natural and built heritage. 'Recording Britain' suggested that landscape, culture and craft were not only things that were worth protecting – they were also things that were worth fighting for.

Historic England’s Photographic Archive
Despite Kenneth Clark's passion for drawing, it did not mean that he was opposed to the use of photography. In 1941, he helped establish a photographic scheme called The National Buildings Record that documented buildings at risk during the war. Today it forms part of the archive at Historic England. View it online here.

The Collection of the War Artists' Advisory Committee
As mentioned above, Clark viewed the 'Recording Britain' scheme as an extension of the Official War Artist scheme. This initiative aimed to compile a comprehensive artistic record of the history of Britain throughout the war. Today, more than half of the collection is held at the Imperial War Museum, and their 2007 book Art from the Second World War presents a solid introduction to the scheme.

'Up My Street' by Louise Lockhart
A contemporary take on the 'Recording Britain' project, Louise Lockhart's 2015 large-format concertina book attempts to record the independent shops of the British high street. As single-store retailers fall into decline, Lockhart's book playfully celebrates their uniqueness and champions tradition over the faceless monotony of the chain store.