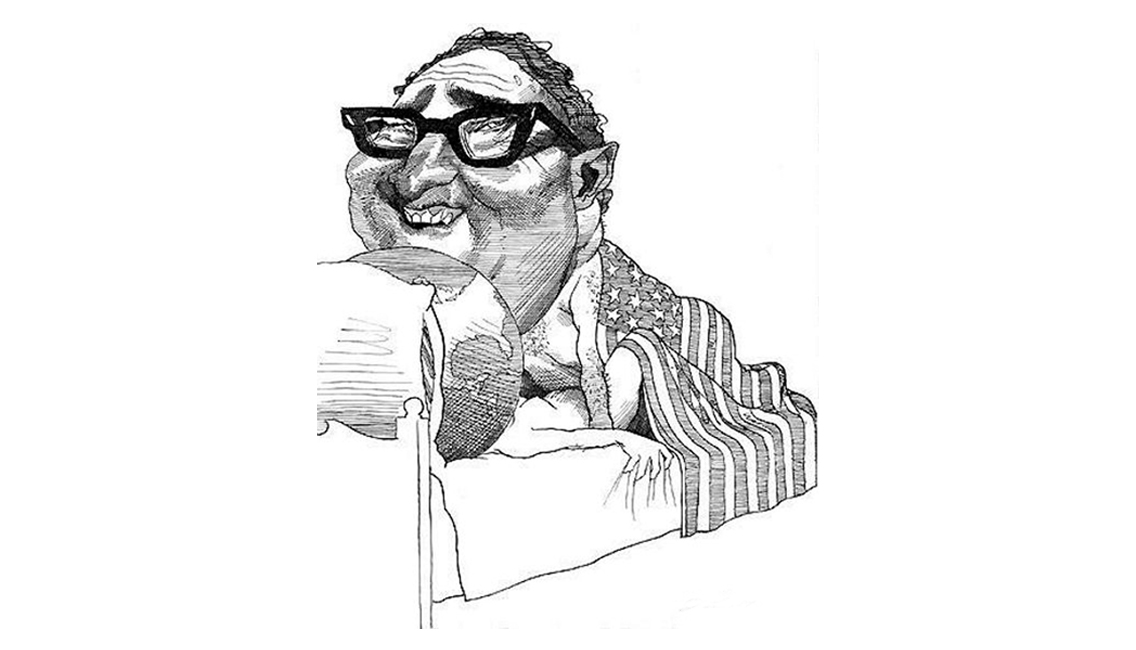 Screwing the World with David Levine

In 1984 the illustrator David Levine (1926–2009) received a phone call from the editor of The Nation. “Dave I think you oughta come down here, there's a group of young interns that want to question some things you did in that drawing.” The drawing they had an issue with showed a caricature of Henry Kissinger gleefully having sex with a globe-headed woman. It was no surprise that people were asking questions.

Already rejected by The New York Review of Books, The Nation had been Levine's next stop. According to him, the progressive political magazine was known among cartoonists as the place to go if you “really had to try something, or [if] you wanted something that would be loaded in political terms”. His cartoon was certainly loaded.

For some, the 'screwing the world' joke may feel like a cheap laugh, yet — in Levine's hands — it takes on a much more sinister tone. Several decades on, the then-editor — Victor Saul Navasky — would reflect on the image: “The look on Kissinger's face, mingling ecstasy and evil from behind thick black horn-rimmed glasses, made it somehow more than just a caricature. It seemed to capture Kissinger's complicated soul".

For me, the image perfectly demonstrates both the power and the challenges of caricature. One glance at it tells you quite clearly that Kissinger revels in international dominance, but it also poses a number of challenging questions. Is the hand clutching the bed a show of passion, fear or anger? Does the image play off a stereotype or does it reinforce one? Is this image to be read as sex or as rape?

Levine was an illustrator who wasn't afraid to present ambiguous questions. He didn't suffer fools gladly and never shied away from presenting the world as a deeply challenging place. A Levine caricature could capture the complexities of a person's personality – refining them down to just one single image.

From presidents like Nixon, Reagan and Clinton to writers like Milton, Hemingway and Updike, Levine built a career through his crosshatched pen-and-ink drawings. Arguably only Al Hirschfeld (who has been featured previously on this site) captured as many people in the span of a career. While Hirschfeld's portrait of the United States was a glamorous one, Levine was far more interested in taking a critical look at the complexities of the world.

Perhaps the best-known example of this is seen in his 1966 caricature of Lyndon B. Johnson. Using the iconic photo of the American President revealing a scar from a recent gall bladder surgery, Levine replaces the mark with a scar in the shape of Vietnam.

Through Levine's pen, the country becomes a self-inflicted wound, a defining physical mark that is engrained on the man. Yet while Levine could have played this idea for a quick laugh, he chooses instead to present the portrait in stark sobriety. You can look at the caricature and feel the dark complexities of the former President. Clearly, Levine is critical of Johnson, but he's not afraid to also allow for some tragedy and poignancy to creep out from under the surface.

Even outside of the political sphere, his caricatures could be dark and despairing. His 1989 image of Richard Burton shows the actor attempting to balance his artistic talents with his notorious alcoholism. Levine shows him balanced precariously on a skull — in one hand he is holding a bottle; in the other, he holds his heart. For a portrait of John Wayne, he undermines the celebrated American icon's pro-war stance by showing him with the eyes of a stone-cold killer.

When Levine died in 2009, it was unanimously agreed that the world had lost one of the greatest caricaturists of the twentieth century. His drawings brought an intelligent eye to an unkind and unforgiving world. They captured the complexities of life, of people and of politics and helped us understand these things just a little bit better. To put it another way: he was one of the greatest satirists of his time.

The Edward Sorel documentary 'Nice Work If You Can Get It'
Left-wing politics and cartoons tend to go hand-in-hand. Edward Sorel (b. 1929) has been producing left-liberal social commentaries for several decades. In 2011 his son put together a 20-minute documentary that explores his life and work. It's well worth your time.