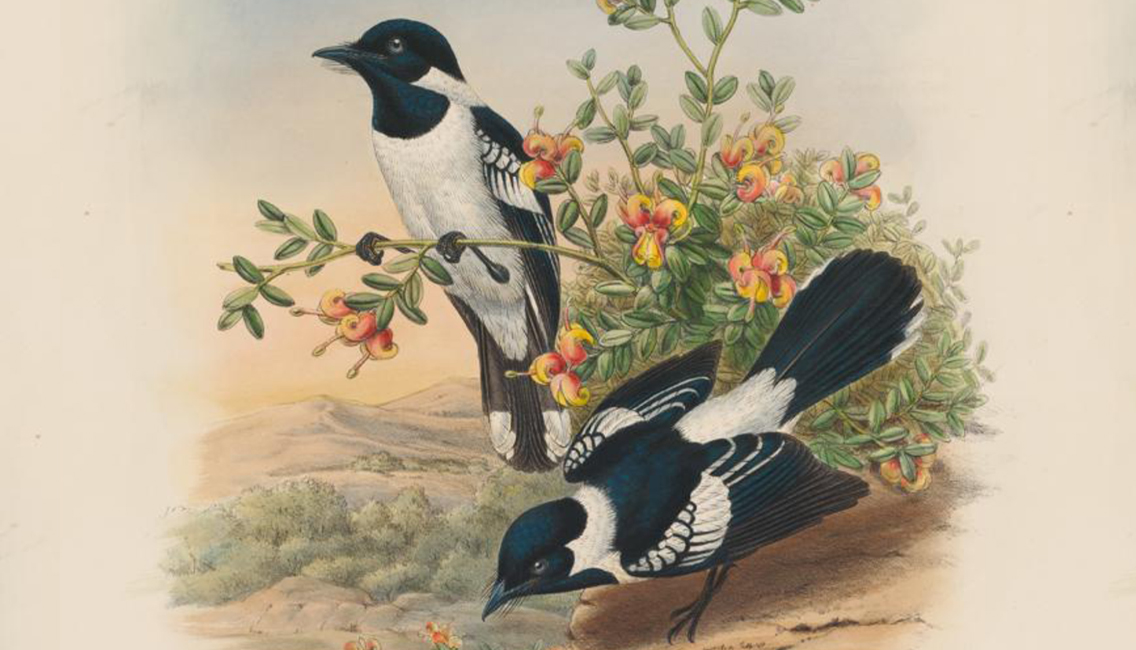 John Gould was not a sentimental man but, in 1875, he must have taken a little time to look back on his life. He had reached the age of seventy-one. And he had come to a point where much of his world was starting to fade away. His wife had been dead for a number of years, his children had all left the family home, and his long-time collaborator – Edwin Prince – had recently passed away.

This particular death must have certainly forced Gould to reflect on his achievements. Prince had been a loyal assistant, clerk and secretary to Gould for forty-five years, and during that time, they had published a vast collection of monographs covering a wide variety of bird species. These publications helped Gould earn a reputation as one of the most important ornithological illustrators of all time, and – to this day – his work continues to be seen as the definitive study of nineteenth-century birds.

In his lifetime, Gould's financial success was completely unrelieved. As a boy, he had dreamt of fame, and respectability and he had lived long enough to see this all come true. For most, this would have been the perfect time to withdraw from professional life, but Gould's ambition was far greater than that of the average person. Even with his long-term collaborator dead, he continued to press on.

On the 1st of December 1875, he released the first part of a new book entitled The Birds of New Guinea and the Adjacent Papuan Islands. Billed as both a continuation of his groundbreaking Birds of Australia book (1840–1848) and as a new standalone publication – this new title attracted a huge audience and quickly became a massive financial success.

Today, the publication is often not listed amongst Gould’s more celebrated works, but I believe that it provides us with a fantastic window into his world. Not only does The Birds of New Guinea tell us about the culture of nineteenth-century ornithology, but it also perfectly demonstrates the author’s irrepressible ambition. Here was a man who had already published studies on the birds of Britain, Australia, Asia and Europe and, at the age of seventy-one, he was still eager to see more, write more and publish more. He was a man truly obsessed with birds.

This publication is also arguably the last great ornithological book of its era. By 1875, science was starting to modernise. While art and science had originally enjoyed a healthy relationship – with both being held in equal regard – science was now beginning to explore places that went beyond the limitations of representation. Arguably it was Gould himself who had helped to bring the discipline to this point.

During the nineteenth century, the Victorians loved both art and science. Gould’s work brought these two things together with style and panache. His images struck the perfect balance between being both aesthetic and informative. His publications were highly desired objects that attracted everyone from universities and libraries to statesmen and monarchs. His work even played a vital role in the inception of Darwin's Theory of Evolution by Natural Selection (1859).

Behind the scenes, Gould was operating as a full-on enterprise. His books were massive ventures that required taxidermists, draughtsmen, lithographers, colourists and printers. As a businessman, he worked hard to attract subscribers, and these then funded the expensive production of each lavish publication. His success came from his abilities as an entrepreneur as well as from his undeniable understanding of birds. His skills as an illustrator were not quite as impressive as he would have had you believe. In truth, ‘Gould: the Illustrator’ was mainly a self-perpetuated myth.

Gould's name may have been on the inside cover of every book, but the work it contained came from a number of illustrators – many of whom went unacknowledged. In his early days, he owed nearly everything to the talents of both his wife Elizabeth (1804–1841) and a young Edward Lear (1812–1888). Arguably Gould's drive was never about being seen as an extraordinary artist; his ambition stemmed from a desire to survey and classify as many types of birds as he could. He worked during the era of colonialism and Empire. The Victorians were obsessed with conquering the wild, and Gould's work celebrated man's control over the unknown. His birds were a testament to the British Empire's dominion over nature.

In a time before photography, death was the preferred way to capture a subject. Naturalists would travel on expedition – scouring the wild and hunting for new species. Skins and skeletons would be hauled onto ships and sent back home to be recreated through the art of taxidermy. In the early 1800s, this art form was in its infancy, yet it quickly developed into a crucial tool for scientific research. Gould had experience in this field, and he would often draw from these displays. Upon finishing a sketch, he would then get an illustrator on board. They would refine his work, and he would direct them in a way that could help them capture even more of the individual nature of each subject.

Lithography was the main process for printing at that time, and so an illustrator's drawing would then have to be transferred over onto a lithographic plate. The image would then be printed and coloured by hand. It was a long, and time-consuming process and each book would take years to fully complete.

In the case of The Birds of New Guinea, the book was so ambitious in scale that it took thirteen years to be released in full. Consisting of five folio volumes, it contains three-hundred and twenty illustrated plates. The project was so large that Gould sadly was unable to see the final work completed. The last folio in the series was published in 1888 – seven years after Gould had passed away. Upon his death, his job was completed by the ornithologist Richard Bowdler Sharpe (1847–1909).

Other people involved in this publication included Gould’s illustrators Henry Constantine Richter (1821–1902) and William Matthew Hart (1830-1908) (many of Hart's illustrations are the ones featured in this essay). Other illustrators may have been involved in this project too, but Gould liked to keep his inner sanctum as private as possible. Knowing the exact inner workings of his practice is now almost impossible. His life and work were fuelled by a sole desire to be accepted by both science and society, and he stopped at nothing to cement his reputation as the world's premier authority on birds.

In many ways, Gould succeeded. His work influenced a huge number of the leading scholars and scientists of the day, and his contribution to the burgeoning world of science remains unrivalled. He also helped to popularise nature, and – despite the cruel and ruthless methods of Victorian ornithology – he helped to inspire future generations who are now working to preserve and protect the natural world.

Gould was a man of his time, and he continues to remain a fascinating and complex character within the histories of science, nature and illustration. In his life, he produced more than forty folio volumes and over three thousand coloured plates. Despite any reservations one might have, his contribution to the world of birds is utterly immense and his popular nickname as 'The Bird Man' is one that is well and truly deserved.

Isabella Tree's biography on John Gould
If you're interested in discovering more about the life and work of Gould, I recommend reading The Bird Man by Isabella Tree. It is an enjoyable and informative account for anyone interested in the world of ornithology.

Audubon's The Birds of America
John James Audubon (1785–1851) was America's answer to Gould (or visa-versa depending on which side of the Atlantic you're on). An ornithologist, naturalist and painter, his study into the birds of America is often acknowledged as one of the most important and most beautiful colour plate books ever published.

The Ornithological Illustration of Edward Lear
Despite being better known for his nonsense rhythms and silly limericks, Lear (1812–1888) was a highly skilled illustrator whose bird illustrations are incredibly accomplished. Exploited by Gould in his early years, Lear continued to remain bitter about his unfair treatment even after Gould's death. In 1980, a collection of his bird illustrations was compiled by Susan Hyman.