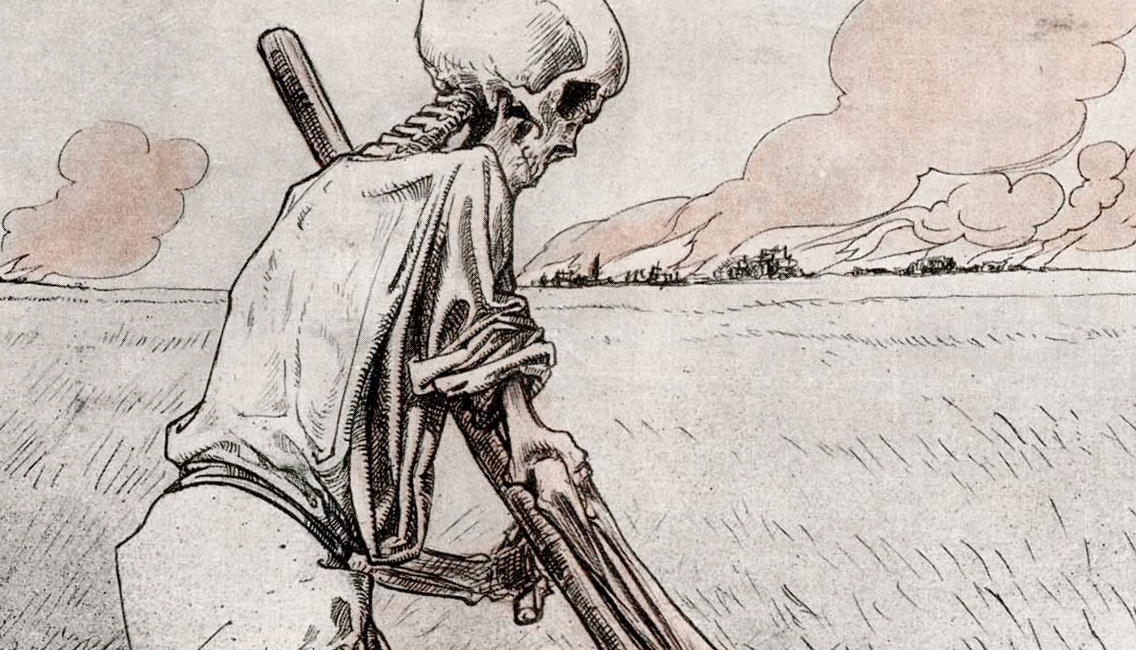 Swaying Destiny with a Pencil: The Anti-War Cartoons of Louis Raemaekers

In September 1914, a top-secret propaganda bureau was established at Wellington House in London. Run by writer Charles Masterman, the actions of this bureau were so covert that most MPs had no idea that the department even existed. Its aims were simple – put together materials that highlighted Britain’s war effort and try and encourage neutral powers to enter the war. To do this, they worked on a variety of projects, including making publications, delivering speeches and holding exhibitions – they even worked with high-profile authors on books and pamphlets that promoted the government's agenda. All of this was done with the utmost secrecy – and few people were aware that these projects were designed primarily as tools for propaganda.

One of Masterman's biggest tasks was trying to encourage the US to enter the war. Eager to find some form of propaganda that might convince them that they needed to intervene, he found his answer in the form of a rather unassuming yet remarkably talented Dutch cartoonist. His name was Louis Raemaekers (1869–1956).

Raemaekers had started his career as an art teacher and illustrator – but, at the age of thirty-nine, he was offered a job as a political cartoonist for the Dutch newspaper Algemeen Handelsblad. He worked there for three years before moving to the country's largest daily morning newspaper De Telegraaf.

Raemaekers was a pacifist, and his cartoons frequently expressed his pacifist views. When Germany invaded Belgium in August of 1914, Raemaekers was shocked and appalled. Immediately he became one of Germany's fiercest critics, using his pencil as a weapon to create images that characterised and criticised the brutality of the war. At De Telegraaf, he heard stories from reporters who had seen the situation first-hand, and he heard accounts from Belgian refugees who had poured across the border. During the early days of the war, he produced some of his most poignant and emotionally charged works. In these images, Raemaekers' stance was clear: the Netherlands could not stay neutral while their neighbours were suffering.

Often printed large on the front page of the paper, these cartoons instantly proved divisive, and, as his reputation grew, so too did his notoriety. These cartoons were so powerful that many criticized him for endangering Dutch neutrality, and the country's Minister of Foreign Affairs even organised a meeting where he pleaded with Raemaekers to stop producing work that criticized the German Kaiser and his army.

Raemaekers' prints and albums would occasionally be confiscated by the Dutch government, and some even say that the Germans had put a price of twelve thousand guilders on his head (about €135,000 in today's money).

No cartoonist exercised more influence than Raemaekers and, by the following year, that influence had gone international. His country's neutrality had framed him as an impartial observer, and this provided him with a much stronger platform for voicing his views on world events. In France, his illustrations were printed as postcards, and, in early 1916, he was awarded a medal of the Legion of Honour. In England, Raemaekers had an exhibition at London's Fine Art Society, and its success quickly led to him becoming a celebrity.

The power of his popularity was quickly recognised by Masterman's propaganda bureau, who were eager to involve him in their efforts. At this point in history, the word 'propaganda' had not taken on the negative connotation that it has today and their involvement led to an album featuring prints of some of Raemaekers' most popular cartoons. Distributed all over the world, it featured notes from well-known English writers, and the government even issued it to soldiers who were leaving for the front. The book was eventually translated into eighteen languages, and it carried a special 'Note of Appreciation' from the British Prime Minister.

Another noteworthy outcome from Raemaekers' governmental collaboration was his access to – and use of – the Bryce Report. Published in 1915 – this independent report presented an extreme view of the atrocities that were happening in Belgium. Filled with lurid eyewitness testimonies, Raemaekers would frequently use these stories as inspiration for his illustrations – exposing many of the most horrific aspects of the German invasion. However, when the war ended, this report faced strong criticism after a Belgian inquiry examined its legitimacy and failed to corroborate any of the reported allegations.

Despite the questionable origins of some of his work's inspiration, the demand for his cartoons was truly staggering. By 1916, his acclaim and influence had reached unparalleled heights. There were pamphlets and albums, posters, and postcards. Cigarettes would come with Raemaekers cards depicting his spine-chilling cartoons, while audiences attended live performances with British illustrators recreating some of his most famous work live on stage. His drawings were exhibited on all five continents, and some aristocratic households even held special afternoons where his drawings were staged as elaborate tableaux vivants.

All the while, Charles Masterman had his eye on the United States, certain that their involvement in the war would eventually bring about victory for the Allied Powers. Many of Raemaekers cartoons had been critical of the United States’ neutrality, and so, in July of 1917, Raemaekers made his first visit to the USA. While the country had already entered the war three months prior, many felt that they still needed to do more. Masterman thought that by meeting a cartoonist from the neutral Netherlands, his work would help to strengthen public opinion about the war effort.

Much like his initial move to England, Raemaekers' US tour was a resounding success. Wellington House organised for him to give talks, lectures and to attend functions – he even met with President Woodrow Wilson and former President Theodore Roosevelt. Arguably his most impressive state-side achievement was signing with William Randolph Hearst's International News Service. Hearst's agency had taken a pro-German stance during the war, but Raemaekers believed that this readership was the most important demographic to target.

His decision proved correct. By the end of 1917, Raemaekers was published in more than two thousand newspapers on both sides of the Atlantic, making him arguably the largest propaganda effort of the entire war. The Americans – who had previously felt that their country had no business interfering in a distant foreign war – tilted in favour of the allied nations. And so, under his influence, the direction of the war was changed.

After the armistice, Raemaekers used his illustration skills to champion the League of Nations and, later, to highlight the threat of fascism in both Germany and Italy. In the four years of the war, he had published well over a thousand cartoons.

While this work was undoubtedly socially significant, it is also important to acknowledge how unique these images are. During the war, the popularity of cartoons and caricatures surged. Yet the majority of illustrators used their skills to poke fun at politicians and to satirise the enemy. Raemaekers' work stands apart – recognising that illustration has the power to also highlight the horrors of the world. His work leaves us with a valuable cultural account of a dark moment in history. As Theodore Roosevelt once put it: “his cartoons constitute the most powerful contribution made by neutrals to the cause of civilization in the World War.”

Muirhead Bone's Battle of the Somme
After witnessing the response that Raemakers' work had on the public, Masterman truly realised the power that art could have as a tool for propaganda. He decided to send a number of professional artists to France so that they could report directly from the trenches. The first official war artist he sent was Muirhead Bone (1876–1953), who documented the Battle of the Somme with stark and sombre precision.

Bert Thomas' Propaganda Posters
During both World Wars, the political cartoonist Bert Thomas (1883–1966) produced a number of propaganda posters. His biggest success was a work titled Arf a mo, Kaiser (1914) – a newspaper illustration that helped to raise nearly a quarter of a million pounds for cigarettes and tobacco that was sent to men on the front line.

Bruce Bairnsfather’s Old Bill cartoon
British cartoonist Bruce Bairnsfather (1887–1959) is best remembered for creating the character of Old Bill. His cartoons boosted morale during the war by presenting a humorous take on life in the trenches.