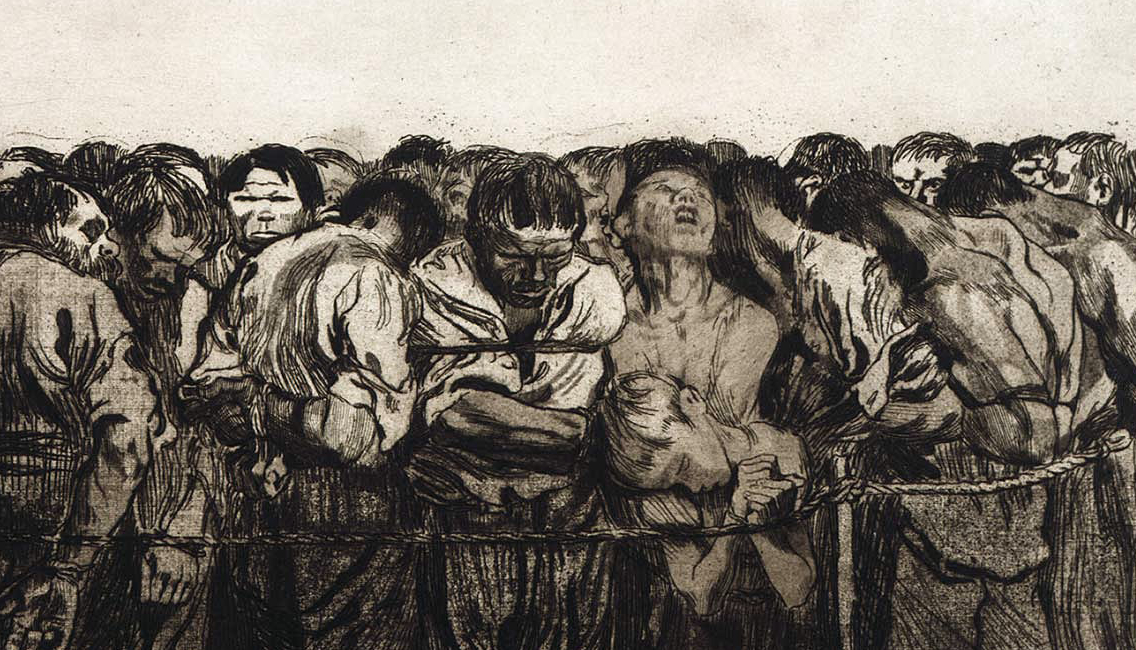 War and Compassion: The Art of Käthe Kollwitz

In 1908 the German graphic artist, illustrator and sculpture Käthe Kollwitz (1867–1945) published The Peasants' War (Bauernkrieg). This print cycle had taken her six years to complete and showed a series of seven imagined scenes set within the very real historical events of the Great Peasants' Revolt (1522–1525). The series arguably remains her most ambitious and accomplished work. Having had great success with her series, the Weavers' Revolt  (1893–98), this cycle cemented her reputation as one of the foremost printmakers in Germany. Much like her first cycle, this series of images depicted the oppressed and the disempowered. This subject would become a life-long commitment for the artist.

Despite the works historic backdrop, Kollwitz’ interest wasn’t in depicting a particular time or place. For her, the Peasants' War was emblematic of the intolerable conditions forced upon the poor. Her motivation came from a sense of empathy towards those that were less fortunate in life, and her interest lay in showing the ever-constant struggles of her fellow man.

Each image in this series focuses on the mistreatment of the oppressed. We can see their outrage, their resilience, and their misfortunes. Perhaps surprisingly, not once does Kollwitz show us the perpetrators of these horrors. Instead, her sole focus is on the lives of the victims.

In her final etching of this series, one might presume to find some resolve. Many artists would choose to show a resolution through a confrontation between the oppressed and their oppressors. Yet Kollwitz has the courage to continue to place all her attention on the victims. In ‘The Prisoners’, we see the defeated men of war. They are herded together behind barbed wire, awaiting punishment and execution. We get a sense of despair in their faces, yet there is also pride among these men. If any resolution is to be found, then it is through their sense of unity. They may have lost the war, but they fought for their beliefs, and their stance feels defiant. While they may be defeated, they still have strength through their sense of solidarity.

As an artist, Käthe Kollwitz gave shape to war, but sadly, war also shaped her. The sixth print in this cycle was completed in 1907, and it was set on a battlefield at night. It shows a horrific scene of a mother being confronted by the body of her dead son. For this work, Kollwitz would have used herself and her own son Peter as models for the mother and child. Seven years later, Peter would himself die on the battlefields of Belgium.

Both Kollwitz and her husband were committed pacifists. Peter was only eighteen when the First World War broke out, and those that were under the age of twenty-one needed to gain their parents' permission before they could enlist. Both parents were reluctant to give permission to their son, yet Peter's conviction to the cause eventually convinced his mother to allow him to fight. He died only ten days after his departure. The impact of this death played an understandably important role in the rest of Kollwitz' life and work. She dedicated much of her later career to creating images that promoted peace and questioned the necessity of war.

Her third print cycle was simply titled War (Krieg). Produced between 1921–22, this series of seven woodcuts was dramatically pared down in contrast to her previous work. The images here have an urgency and power to them. During the period in which this work was made, she wrote in her diary: “I intend to have an effect on these times in which human beings are so distraught and helpless.”

The second – and best-known – sheet in the series is undoubtedly 1921's The Volunteers (Die Freiwilligen). It depicts a group of young men who have offered themselves to the cause. We see them all moving together and following the beat of a drum. At the left of the scene, we can see that the leader of the group is none other than Death himself; he marches Germany's youth into their own demise.

The most moving image in the series is The Mothers (Die Mütter) – the sixth sheet in the cycle. It shows a group of grieving mothers all huddled together – it is no accident that their bodies form the shape of a tombstone. Again, Kollwitz is interested in the importance of solidarity amongst people. Much like The Prisoners (1908), this image shows that there is a sense of strength to be found in the unity of people.

Empathy and compassion are central to all of Kollwitz' work. Her images avoid sentimentality, yet they are still tender and sympathetic. “She doesn’t commemorate" notes the poet Ruth Padel, “she faces pain”. Padel explains why she feels Kollwitz' work is so unique: “She is not aestheticising pain, she is looking at it”.

Padel argues that Kollwitz was a pioneer in dissociating art from beauty, yet Kollwitz herself might have disagreed. To her, beauty was to be found in the dignity of people. “Unattractive altogether were to me the people from bourgeois life,” she wrote in her diary in 1941. In contrast to the proletariat, “the entire bourgeois life seemed to be pedantic.”

The middle-classes were shocked by Kollwitz' work, and her images weren't just limited to print cycles – she produced a number of posters (primarily between 1919 and 1926). These illustrated works dealt head-on with the effects that the First World War had had on Germany. Pasted onto Berlin's ubiquitous cylindrical billboards, they would have brought Kollwitz' confrontational work directly to the streets.

Each of these posters had been commissioned individually, yet they all addressed causes that Kollwitz believed in. In a letter to her friend Erna Kruger, we get a sense of her thoughts about working on such a public commission: “Some may say a thousand times, that is not pure art [...] But as long, as I can work, I want to be effective with my art.”

These posters brought Kollwitz' work to a whole new audience outside of the art world. And they also helped her to bring attention to the humanitarian causes that she was passionate about. Her posters, pamphlets and postcards addressed issues of injustice, poverty, hunger and exploitation – as well as a number of issues relating to women’s rights such as abortion, labour and domestic abuse.

Her most famous poster shows an androgynous figure with an arm in the air. Behind them are the words: "Nie Wieder Krieg" – (Never Again War). It is a simple and striking image and a perfect example of Kollwitz' desire to find a visual language that could feel direct and universal. The image is black-and-white and simple in form. The use of print means that it was inexpensive to produce, quick to reproduce and easy to disseminate. The printed image was not seen as high art. This was most certainly not the art for the bourgeois.

Kollwitz worked tirelessly to produce work that could be direct and accessible, and each of these decisions was deliberate. The effectiveness of these choices is evident in the success of the finished work. Kollwitz' Never Again War poster became an icon of the anti-war movement – and it continued to be seen on the streets of West Germany even up until the 1980s.

During the twenties, Kollwitz produced her second-last print cycle – Proletariat (1924–25) – and also became the first female director of the Master Studio for Graphic Arts at Berlin's Academy of Arts (1928). During this time, she also completed her most personal work – The Grieving Parents (Die traauernden Eltrern) – a memorial sculpture to Peter, which she conceived of soon after hearing of his death. Carved in granite – the final work took eight years to complete – and was eventually placed in the military cemetery in Roggevelde in Belgium.

It is a harrowing and intensely personal work. Carved in the image of her and her husband, the two figures kneel – not only to pay respect to those who had died – but also to ask forgiveness. These are the parents of Germany, the parents that asked their sons to give their lives for a futile war. Like all of Kollwitz' output, this artwork stands in solidarity with those that have suffered, and asks that this kind of suffering does not continue. Seven years after its completion, Germany found itself once again at war.

Käthe Kollwitz died on 22 April 1945 – just two weeks before the German surrender. She had witnessed the destruction and misery of both world wars, and – through it all – she remained a staunch advocate for social justice. Today, she is regarded as one of the most important German artists of the twentieth century, and her work stands as an important record of revolt amid the country's troubled history. As ordinary people continue to face hardship, injustice and tragedy, the importance of Kollwitz' empathic work continues to resonate. Her enduring legacy is one of compassion, and it is a legacy that deserves to be remembered.

Max Klinger's A Life print cycle
The work of German artist Max Klinger (1857–1920) was a big influence on Kollwitz. A friend to Swiss painter Karl Stauffer-Bern (1857–1891), Kollwitz would have discovered Klinger's work through Stauffer-Bern when she was his student. Klinger's 1884 print cycle, A Life (Ein Leben), explored the injustice experienced by a young woman forced into prostitution. It would have greatly influenced much of Kollwitz' early work.

Ernst Barlach's Woodcuts
Ernst Barlach (1870–1938) was a friend of Kollwitz, and the two shared a deep belief in pacifism that grew from their experiences of World War I. Barlach worked as a sculptor, printmaker and writer, and his woodcut prints are said to have inspired Kollwitz' War series.

George Grosz, Otto Dix and the New Objectivity
Reacting against the self-involved and overly-romantic nature of the German Expressionist Movement, a number of artists aimed to make work that depicted society in a more honest fashion. Their work would form a movement known as the New Objectivity. While Kollwitz' work preferred to focus on those that suffered, artists like Dix (1891–1969) and Grosz (1893–1959) took aim at those that were responsible for creating this plight.