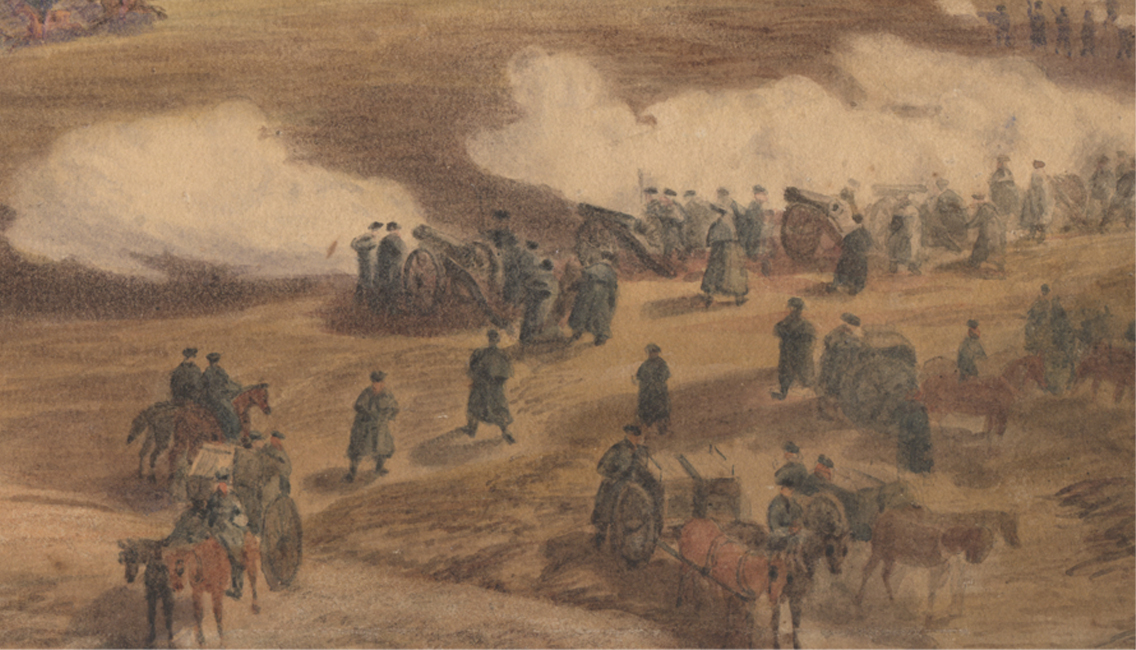 The 1850s were turbulent times. The Industrial Revolution had shaken the Western World, and the impact of its importance was still being felt. Mass migration swept through the United States as pioneers and railroads raced westward – while, in the East, the British and French Empires expanded their colonial reach with rifled muskets and gunboat diplomacy. A new modern age had arrived, and history was stumbling into it with its usual sense of chaotic uncertainty.

The Crimean War (1853–1856) feels emblematic of this decade. Here, old met new as horses and swords did battle against mass-produced rifles and long-range cannons. It featured the infamous Charge of the Light Brigade – an event that saw a battalion of British light cavalry ride directly into a three-sided onslaught of artillery and musket fire. It was a massive military blunder, and yet in Britain, its story was told as one of glory and valour.

The war in Crimea was to be the first war in a new age of mass communication. Newspapers now had war correspondents reporting directly from the frontline, while news travelled at never-before-seen speeds thanks to the invention of the telegraph. The public was hungry for up-to-the-minute news, and they continuously demanded accurate reporting. In London, newspaper illustrators attempted to recreate real-life events on paper but, they struggled to do so without the necessary visual records of the places that appeared in their stories.

One illustrator – William Simpson (1823–1899) – was so driven to create accurate artwork that he suggested that he travel to the Crimea to produce on-the-spot sketches. After some consideration, a publisher agreed to his suggestion, and, on the 15th of November 1854, the 31-year-old artist arrived at the old city of Balaclava on the Crimean Peninsula. For many, Simpson would become best known as the world's first war artist.

When Simpson arrived, the war had already been raging for more than a year. Emerging from a dispute over the rights of Christian minorities in the Ottoman-controlled Holy Land, the conflict quickly escalated into a war between Russia and the allied forces of England, France and the Ottoman Empire. Despite its origins, the war’s real purpose was predominately an excuse to exercise military power – it was an opportunity to see whose Empire was the strongest.

Simpson’s first assignment was to cover the disastrous Charge of the Light Brigade. Despite the event having occurred three weeks before his arrival, presenting an image to the British public remained an important task. The charge had taken place at Balaclava, and so, Simpson could easily make sketches from the ground but, to truly capture the scene, he needed to work from descriptions given by those who had actually witnessed the charge first-hand.

While Simpson’s original intention for the trip may have been accuracy, that didn’t stop a fair share of artistic license from creeping into his drawings. In fact, it's more than likely that his illustrations were heavily idealised versions of actual events.

In his autobiography (1903), Simpson recounts how he consulted with the Light Brigade’s commander Lord Cardigan (1797–1868) to ensure that his depiction of the charge was correct. In Simpson’s telling, it took several visits to the commander’s yacht before the sketch was finally met with approval. “The real truth,” he wrote “was that in the last sketch I had taken greater care […] to make his lordship conspicuous in the front of the light brigade”. Cardigan was now happy to call Simpson's depiction the official version of events (pictured above), and so the sketch was dispatched to London on the first available ship.

Simpson’s trip to Crimea had been commissioned by the publisher John Scott of Colnaghi & Co. The aim was for him to produce a series of watercolours and sketches that would eventually go on to become the illustrated portfolio The Seat of War in the East (1855–56). At the time, there was a huge appetite for work like this. Newspapers were full of thrilling accounts of the war, and the British public was eager to get a first-hand look at military life in Crimea.

The process for producing this work saw Simpson making drawings in the field – sometimes in watercolour and often accompanied by a detailed outline that noted important information such as locations, dates and people. Once completed, it was then typically vetted by a general, and – if approved – they would send it on to London using the military’s official postal service. From there, the work would be submitted to the Secretary at War, who then passed it on for further inspection to Queen Victoria. It was only after this long vetting procedure that the images would finally be handed to the lithographers to produce the final work.

In his autobiography, Simpson says that he was determined to “see war in all its phases, venturing even where there was danger.” Despite this, his depictions of battle rarely show the dead or the dying. Perhaps it was the long vetting procedure that shaped the type of work he produced. Alternatively, his own sensibilities may have informed what he decided to depict. After all, he was producing work that would go on to be seen by the British public and showing a bloodless war would seem to be in keeping with the attitudes of the day. As much as these were soldiers, Simpson was also drawing fathers and sons; he must have felt a sense of responsibility in presenting a dignified and honourable depiction of military life in this unique foreign land.

While illustrators may have had the best of intentions with their work, some felt that the press was presenting a much more idealised image of the war. In reality, the Crimean conflict was full of neglect, mismanagement and poor leadership. Troops had insufficient food, and their clothing was completely unsuited to the cold weather of the Crimean winter. Thousands of soldiers perished from exhaustion and disease, and many more died on account of the cold.

One colonel, George Frederick Dallas, had seen how his regiment was depicted in the illustrated news and was completely shocked at how they were presented. “[We were shown] dressed as we ought to be, not as we are,” he wrote in one letter. “I can assure you that to this date, the 12th of January, we’ve neither the huts, fur hats, boots or anything in the picture”.

Despite the devastating effects that the winter brought, the war persisted, and Simpson continued to document it. In total, he spent ten months in Crimea, capturing many conflicts and recording some of the biggest events of the war. He was on friendly terms with many high-ranking officers, including Lord Raglan and William Peel, and he was even in the important city of Sebastopol in June of 1855 when the first attacks took place.

Simpson left Crimea in September of 1855 – the same month that Sevastopol eventually fell. On the 30th of March 1856, a peace treaty was signed, and the war was officially over. The conflict would go on to be known as having the highest casualty rate of any conflict in Europe between 1815 and 1914. Often described as a pointless war, almost three-quarters of a million soldiers lost their lives in the conflict – with most of them dying of disease and neglect.

As for Simpson, he returned to London as a minor celebrity, even earning the nickname 'Crimean Simpson'. His collaboration with Colnaghi & Co – The Seat of the War in the East – became two large portfolios that contained over eighty lithographs. It was a major success, with the publishers producing two thousand copies.

For the next three decades, Simpson would continue to document conflicts around the globe – travelling to exotic places like India, Prussia and Afghanistan. Yet, no book was quite as successful as the one he produced on Crimea. He himself was quick to note this, saying that it “was perhaps the last and largest work of [its] kind”. As mentioned before, the 1850s were a decade being shaped by new technology, and this change was also impacting illustration. Lithography, as Simpson noted, only lasted a quarter of a century. By the mid-nineteenth century, photography was beginning to take its place. The Crimean War may have been the first war to have had an appointed artist – but it was also the very first war to be photographed. The conflict was at the very cusp of a whole new era.

Yet, despite these technological advances, artists and illustrators continued to play a role within war, and – as we will see over the course of the next few essays – their output came in a number of shapes and sizes. Simpson's work is indicative of a time before photography had truly become the norm. His lithographic work is uniquely of its time, and – along with his sketches – it forms an important resource, not just for this period of history, but also for the life and times of a truly fascinating artist, illustrator and adventurer.

Roger Fenton's photographs of the Crimean War
Not only was Crimea the first war to have an artist creating work directly on the battleground, but it was also the first major conflict to ever be photographed. The pioneering British photographer Roger Fenton (1819–1869) landed at Balaklava in March of 1855 and spent over three months documenting the war. An amazing collection of his images can be seen here (including this one of Simpson).

Other artists in Crimea
Despite being dubbed the “earliest of war artists”, Simpson wasn't the only artist in Crimea. For example, English artist Edward Angelo Goodall (1819–1908) was appointed war artist in December 1854 for the Illustrated London News, while French painter Paul Alexandre Protais (1825–1890) compiled a portfolio of sketches of soldiers and scenes from the front.

Watercolours from the War
A number of soldiers in Crimea kept diaries. Perhaps the most interesting of these was a visual diary kept by Captain Henry Clifford (1826–1883) – a talented officer in the Rifle Brigade. His watercolours provide a first-hand account of the war, while his talents as an officer saw him decorated with the prestigious Victoria cross. A small collection of these drawings can be viewed at the Royal Green Jackets Museum.