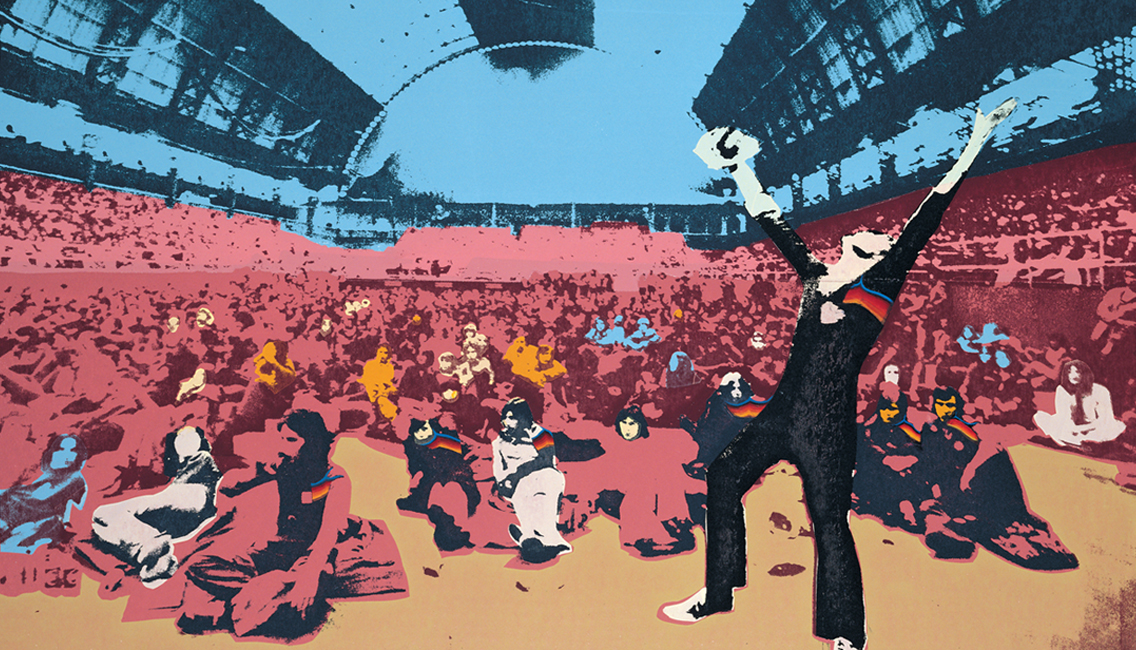 A Vibrant Transcendence: Kate Gibb and the Art of Surrender

In 1999 Kate Gibb found herself perched on the edge of a sofa at the headquarters of Virgin Records at London’s Portobello Dock. She was there to meet the manager of The Chemical Brothers. Following the breakthrough success of the duo's previous album Dig Your Own Hole (1997), Tom Rowlands and Ed Simons had been busy exploring new electronic styles and collaborating with special guest vocalists. The resulting work was Surrender – a joyous blast of electronica that many critics would later go on to hail as their magnum opus. Virgin Records needed a cover image that could capture the exuberance and energy of the music, and the art director Mark Tappin had thought that Gibb might be a good fit for the project.

A year before their meeting, the illustrator and printmaker had completed a masters degree at Central Saint Martins, and – upon graduation – she decided to send out some examples of her work to potential clients. Whatever it was that she sent seemed to have worked as it caught the attention of Tappin, who invited her along to Virgin to hear the album and pitch a potential idea. Gibb was a music fan but, at the time, dance music was hardly on her radar. In an interview in 2014, she talked about her experience of first hearing the record and recalled how Tappin turned to her after it had finished playing and quipped: “It's not Belle and Sebastian, is it Kate?”

Tappin himself had already attempted to create some artwork for the record. Having collaborated with the duo on the cover of their compilation album Brothers Gonna Work It Out (1998), the three of them had been attempting to find an image that might capture the tone of the new record. Eager to escape the kinds of images typically associated with dance music, they began to sift through the Hulton Archive – a huge photographic collection that had recently been acquired by Getty Images. Tappin played around with some of these found images on his computer but they all agreed that everything was feeling too sterile. They needed something vibrant, something with longevity, an image that could still feel fresh a couple of years after its release. As soon as Gibb’s pitch arrived, everything just suddenly seemed to click.

Gibb's work was bright, colourful and full of energy. Even more than that, her technique as a printmaker meant that her illustrations involved textures and layers. When Rowlands and Simons saw her treatments, they had an instant affinity towards it. In many ways, their music shared a commonality with her work. Despite the distinct differences between both disciplines, their music, and her illustrations, both incorporated rich textures and used inventive layering to create something unique. As collaborations go, it was a perfect match.

With Gibb now on board, all four returned to the Hulton Archive and went in search of the right photograph to use. Eventually, they hit upon Jesus Amongst the Fans – an image taken by the photographer Richard Young at The Great British Music Festival at the Kensington Olympia in 1976. "We liked the idea of everyone else sitting down and being chilled out and just one person really getting it," Simons told Q Magazine in 2001. The duo had always wanted the artwork to capture that sense of transcendence that an individual can have when they get lost in music, and the photograph certainly captured that feeling.

Gibb spent a few months working on the project – taking Young's photograph and a few others and developing them into screenprints. Through her acute sense of colour, she transformed each image into a vibrant illustration. Her striking use of colour fitted well with the psychedelic mood of the album, while the mix of old photography and screenprinting gave the imagery a distinctively timeless quality. In addition to the album, Simons and Rowlands also released three singles and an EP. All four featured her artwork.

Much like the album, the artwork was a huge hit with fans, and their collaboration marked the beginning of a long-running partnership. Over the years, Gibb continued to create artwork for The Chemical Brothers – creating covers for the albums Come With Us (2002), We Are The Night (2007) and their greatest hits compilation Brotherhood (2008).

On the eve of releasing Brotherhood, the duo staged their biggest ever gig. 10,000 people attended, and there was only ever one space worthy enough for hosting such a spectacle: the grand hall of the Kensington Olympia. Almost a decade after it had first appeared on their album cover, the duo had finally made it to the stage of this renowned Victorian venue. As they blasted out their array of hits, they must have surely taken a moment to remember their famous cover.

To mark the event, Gibb created a limited-edition poster based on the original artwork. A new colour scheme was used, and more hand-painted rainbows were added, but, for the most part, it was the same illustration. Nine years on and the image still looked just as fresh and vibrant as it had on its day of release. As the night progressed, the hits kept coming, and fans surrendered to the beat. What had started as an image that reflected the music had now turned into a gig that reflected Gibb's artwork. For those lost in the crowd, it was a collective euphoria, and for those lost in the music, it was a moment of transcendence. It's hard to imagine a more fitting celebration for such an iconic artwork.

The art and illustrations of Peter Blake
Often dubbed the 'Godfather of British Pop Art', Blake is perhaps best known for co-creating the iconic cover art for the Beatles' Sgt. Pepper's Lonely Hearts Club Band album. As an artist and illustrator, his work features vibrant colours, inventive collages and a love of print.

The album cover designs of Julian House
Graphic designer, creative director, musician and record label owner; Julian House is a modern-day Renaissance Man. Much like Gibb, colour plays a large role in his work. He is best known for his album cover designs and has worked with the likes of Stereolab, Primal Scream, The Prodigy and Oasis.

The colourful illustrations of Craig & Karl
When it comes to bold colours in contemporary illustration, the duo Craig & Karl are unequalled. Over the years, they have worked with clients on everything from murals and set designs to editorial work and packaging. Their celebrity portraits are particularly strong.