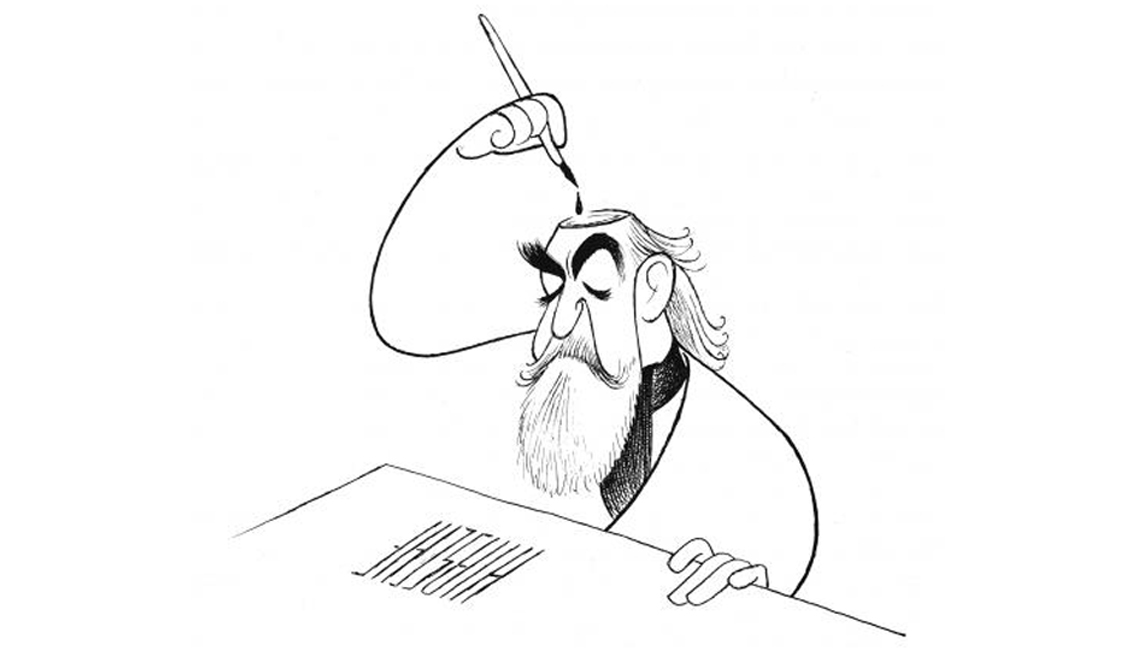 “A good caricature, like every work of art, is more true to life than reality itself.”

These are the words of Annibale Carracci (1560–1609), the famed sixteenth century Baroque painter who gave his name to the art form. Looking at the work of Al Hirschfeld (1903–2003), this statement seems to take on even greater relevance. Hirschfeld was a master of his art. Often his caricatures seemed more real than the people they portrayed. From his first works in 1926 — up until his death in 2003, Hirschfeld's drawings always remained vital and relevant.

Born in Missouri in 1903, Hirschfeld moved to New York when he was twelve years old. He was part of a lucky generation that avoided both wars; too young for the First World War and too old for the second. His early years were set against the backdrop of an exciting era in the story of America; it was a time of jazz music, the Art Deco and pulp magazines. There were new motion pictures, radio shows and a burgeoning celebrity scene. All of this seeped into the cultural fabric of the time, and a new generation of illustrators soaked it up. In the process, they invented a new approach to popular portraiture. They showed that caricature could be more than just sharp and acerbic comments but could instead be fun, playful and lively.

From playwrights and dancers; to the stars of stage and screen, Hirschfeld drew them all! He started young and drew up until the end of his life, chronicling nearly all the major entertainment figures of the twentieth century. His work was accessible yet sophisticated; it was animated yet economic. It was — and remains — a uniquely American story told in a uniquely American way.

What makes Hirschfeld special is the sheer joy in his work. “Everybody looks interesting in a Hirschfeld drawing,” Arthur Miller once wrote, “[that's] because Hirschfeld found everybody to be interesting". In an industry reputed to be filled with cynicism, distrust and bitter rivalries, Hirschfeld had a talent to locate the joy in the performers that he drew.

Nearly everyone felt that it was an honour to be an Al Hirschfeld caricature. It's hard to calculate just how much work he produced in his lifetime (maybe ten thousand to twelve thousand works), yet in all that time, he rarely caused offence.

He described the actor Zero Mostel as “a bundle of dirty laundry”. One could easily be upset by this, yet if you look at Hirschfeld's caricature you can see exactly what he meant. "It was eerie to be Hirschfelded," said the Broadway star Carol Channing, "you'd look at the drawing and think, 'I didn't know he knew what I was thinking. How did he know?'"

Hirschfeld is best known for the work he did at The New York Times. With only a handful of rare exceptions, his illustrations appeared on the paper's drama pages every Sunday for more than seven decades. On Broadway, he was a familiar face at rehearsals and first nights. Afraid of disturbing other viewers, he perfected a technique for sketching in the dark. Using a system of shorthand notations, he could sit quietly in the audience and draw pictures in his pocket without the audience even being aware that he was doing it.

Despite the sharpness of his lines and the clarity of his work, Hirschfeld was also a master of camouflage. Each week, droves of his fans would spend their Sunday's searching for the word 'NINA' in his drawings. What started out as an innocent little gesture to celebrate the birth of his daughter turned into a weekend pastime for millions of readers. He intended for it to be a gimmick for a week or two, but it turned into a continuing motif throughout his work. Every week he'd include a number beside his signature to let fans know just how many 'NINA's' they were looking for.

His 'NINA's' became so popular that they were even adopted as a training exercise by the U.S. Army (much to Hisrchfeld's annoyance). Bomber pilots in training would use the illustrations as a means to improve their detection skills. If they were able to find the 'NINA's' in each illustration then they were sure to be able to detect hidden targets.

Hirschfeld had a gift for drawing elegant lines. He made it look simple, but there was a real complexity to what he did. “After looking at people for ninety years you learn a thing or two,” he said in the 1996 documentary about his life.

Perhaps his best skill lay simply in his capacity for work. Every day he drew. Some days were easy, and some days were hard. There was no real secret to it. On the fourth floor of his East 95th Street townhouse, he'd sit in an old barber chair and draw every day. For Hirschfeld, it was a “lemming's profession” but like any illustrator, it was something he just had to do... and thankfully he did!

Hirschfeld died in 2003. He was ninety-nine years of age. Through his work, he created a vast portrait of America's performing arts. On the day of his hundredth birthday, he received the ultimate Broadway accolade — the Martin Beck Theatre on West 45th Street was renamed the Al Hirschfeld Theatre.

Throughout his career, his processes and style rarely changed, yet his work remained fresh and popular. It was an amazing achievement. It's hard to think of anyone who has achieved a career quite like Hirschfeld, and it's even harder to imagine that someone ever will again. He will always remain a unique one-of-a-kind talent and a true king of Broadway.

The Broadway caricatures of Alex Gard
Alex Gard (1898–1948) was a Russian-American cartoonist who is best known for his caricatures of Broadway celebrities at Sardi's Restaurant in New York City.

The Many Faces of Noma Bar
Much like Hirschfeld, Noma Bar (b. 1973) has a gift for capturing the essence of a person through the simplest of lines. His book Guess Who? (2008) presents a collection of his unique caricatures and is a great introduction to his talent for minimalism.