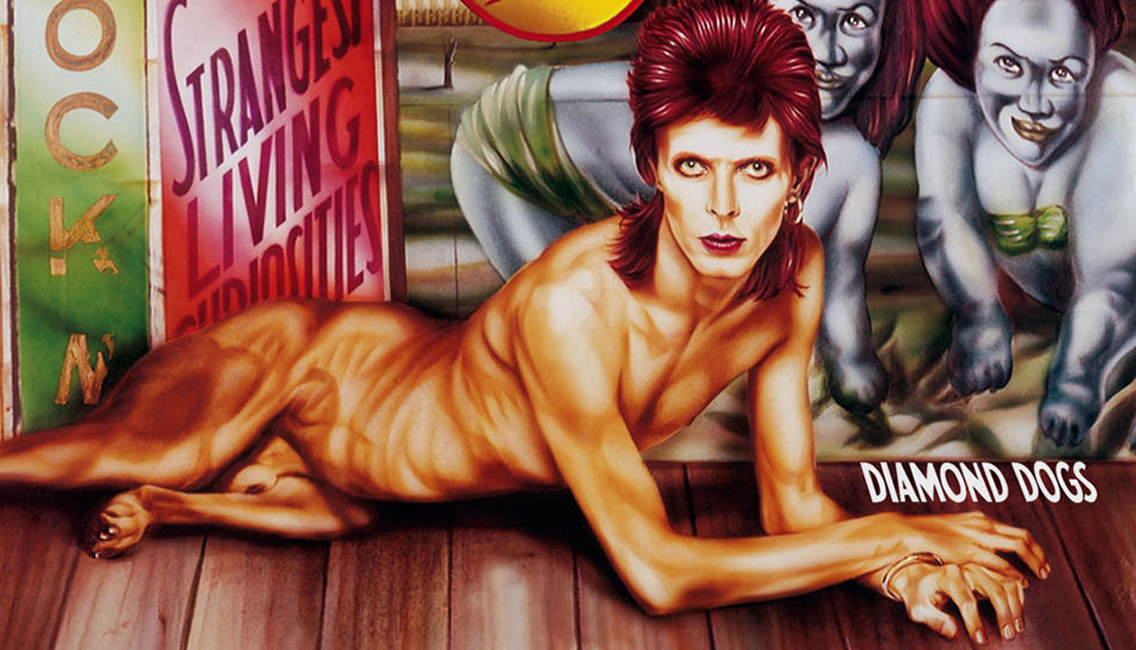 On the title track to the album Diamond Dogs, David Bowie proclaims that “this ain't rock'n'roll—this is genocide!”. It’s a powerful statement – one that stemmed directly from the singer’s realisation that greed was tearing the world apart and that the hedonistic ways of glam rock were simply helping to support the problem.

Released in 1974, the album was a complex blend of grimy textures and existential anxieties. It sat perfectly with the concerns and complexities of the decade. It was a time of great uncertainty, with many accepted norms undermined or placed in doubt. An oil crisis in 1973 upset the balance of power in the West and, in the UK, rising inflation gave way to austerity. There was poverty, protest and power-cuts throughout the country, and while all this chaos reigned, the decadent world of rock kept partying. The irony of all of this was not lost on Bowie.

For as long as musicians have been celebrated and well-regarded, their lifestyles have had the power to enchant and intrigue. We tend to view the world of popular music as a kind of hyperreality – a place where personalities are exaggerated and where the unusual can appear as mere commonplace. Bowie played in this arena, carving out his own unique identities and mythologies. The Belgian illustrator Guy Peellaert (1934–2008) also did this. He found stories to tell in places where fact and fantasy are frequently indistinguishable.

A product of post-war Europe, Peellaert was part of the first generation to be inundated with American art, film noir, pulp literature, jazz records and pop culture. Overwhelmed and inspired in equal measure, his work covered art, painting, illustration, photography and comics. In 1973 he rose to international cult acclaim when he collaborated with the British rock journalist Nik Cohn on a best-selling book called Rock Dreams (an image from this book is pictured above).

Conceived as a series of stills from a motion picture that never happened, his illustrations riffed on great American artists like Hopper and Rockwell while also twisting their styles into darker, gaudier and more surreal territory. His images chimed well with the tastes of a disillusioned generation, and the book sold over a million copies in its first year. Among its fans were a plethora of celebrities, including the likes of Jack Nicholson, John Lennon and Mick Jagger.

Jagger was so taken with Peellaert’s work that he asked him to create the artwork for the next Stones’ album – It's Only Rock 'n Roll (above). At the time, Bowie had an ever-deepening fixation with the band, and, upon hearing of the commission, he went behind Jagger’s back and cajoled the illustrator into also working on his cover. Bowie was a friend, a peer and a rival to Jagger, and he knew that his album was scheduled to be released almost five months before the new Stones’ record.

Entitled Diamond Dogs, it had originally been devised as a stage adaptation of George Orwell’s Nineteen Eighty-Four (1949). But, when Bowie was unable to obtain the rights from Orwell’s estate, he salvaged the situation by Frankensteining together old ideas with Burroughs-esque cut-up lyrics. What emerged was a deeply personal record – a vision of bleak totalitarianism set against a glam-tinged dystopia. It was kitsch, dark and scary – Peellaert’s style was the perfect fit.

Bowie had already developed the concept of a half-man, half-dog creature for his cover. Inspired by a 1926 photograph of the famed dancer, singer and actress Josephine Baker, Bowie originally worked with the photographer Terry O’Neill (b. 1938) to capture the pose. During the session, he asked Peellaert to use O’Neill’s photographs to transform him into the striking sphinx-like creature that now appears on the cover. Peellaert loved the concept, and, back at his studio, he set about merging Bowie’s body with the legs of a whippet and adding in freak show details.

The resulting cover was a grotesque wonder that fitted perfectly with the tone of the album. On its release, the image was met with controversy when record executives noticed that Peellaert had decided to include genitals on Bowie's warped body. Terrified of causing offence, they made an eleventh-hour adjustment and airbrushed out the offending appendages. That didn’t stop some original copies from finding their way onto the market and, today, some collectors are willing to pay almost $9,000 for one of these rare covers.

Peellaert was not very taken with being censored, but he did acknowledge that the controversy stirred up further interest in his work. After its release, the illustrator worked on a string of high-profile commissions, including the iconic poster for Martin Scorsese’s Taxi Driver (1976).

Upon his death in 2008, both his widow and son set about preserving his legacy and, today, a slowly growing archive can be found online. As for Diamond Dogs, the album received mixed critical acclaim on its initial release, but these days many have reassessed its legacy and fallen for its messy blend of darkness and despair. Bowie was an artist in continuous metamorphosis, and this was his swansong to the era of glam rock. It was grim, grimy and freakish – just perfect for Peellaert.

The album covers of Neon Park
The American artist and illustrator Neon Park (1940–1993) shares a similar taste to Peellaert for pop art and the surreal. Park created the cover for Bowie's 1973 compilation Images 1966–1967. He also created covers for Frank Zappa, the Beach Boys and, most notably, the American rock band Little Feat.

Helen Green’s animated portrait of David Bowie
In 2014 the English illustrator Helen Green (b. 1992) created Time May Change Me; a series of twenty-nine portraits of Bowie that span the majority of his career. When compiled together the images form an impressive motion portrait that captures the ever-changing persona of one of pop's greatest icons.