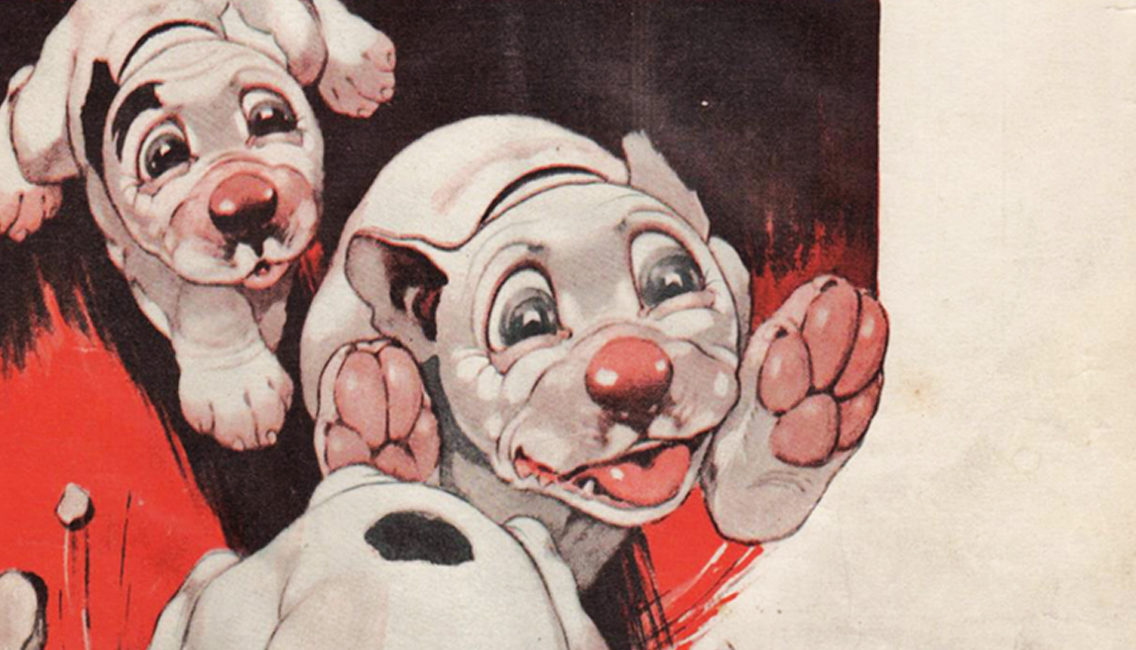 When the illustrator George Studdy (1878–1948) first began including dogs in his work, it would be hard to imagine that he would have foreseen the level of success that one of them would eventually go on to have. His creation, Bonzo, had a massive impact on the world of popular culture and his little dog was loved by both children and adults alike. A defining figure of the twenties and thirties, Bonzo's popularity brought about a new wave of mass-marketed merchandise, and – to this day – his legacy continues to be seen around the world.

Studdy’s cheeky little pup first arrived in 1922. The illustrator had been drawing mischievous dogs for years, but it wasn’t until they started to appear in the pages of the British society magazine The Sketch that things really took off. Prompted by his editor to trial a series of full-page dog illustrations, the work was a resounding success. People loved his chubby little creation, and they soon started demanding to know what its name might be. On the 8th of November 1922, The Sketch’s editor, Bruce Ingram, published a caption announcing that the dog was called Bonzo. A star was born!

Within months, Bonzo had hit the big time. Not only was he hugely popular in his native England, but he was also growing a large international profile. He was published in America with syndication over several newspapers. He also appeared in publications in places like India, South Africa and South America. By 1923, Bonzo had made his stage debut in a Jack Buchanan production of Battling Butler at the Adelphi. The Sketch was also keen to cash in on the little dog's success, and, in that same year, they launched a collection of portfolios featuring prints of the dog's previous full-page mishaps and adventures.

By 1924, Bonzo had well-and-truly become a phenomenon. By October of that year, Studdy’s creation was appearing on the silver screen in a film called A Sausage Snatching Sensation. This appearance saw Bonzo become one of the world’s first cartoon characters, and, in total, he went on to appear in twenty-six films. His screen debut must have been quite the night. Released four years before Disney’s Mickey Mouse – Bonzo’s premiere was attended by none other than King George V and Queen Mary. The screening was the very first time a reigning sovereign had ever watched a film performance in a public cinema.

By the mid-1920s, it seemed like everyone was selling Bonzo products and merchandise. The little puppy was reproduced in nearly every form. To this day, the variety of Bonzo products remains staggering. There were jigsaw puzzles, books, calendars, toys, sweets and even chocolate moulds. If you wanted a Bonzo mascot for the front of your car, you could buy one. If you needed to tap the ash of your cigarette into a Bonzo ashtray – then you could buy that too!

Perhaps Studdy's most popular item was his range of collectable Bonzo postcards. Printed by Valentines Postcards of Dundee and London, the illustrator had been producing work for this company since the early days of his career. It made sense that they would print the majority of his Bonzo cards. These pictures came in their hundreds, with Studdy eventually going on to work with them for a total of forty-six years.

Despite the wide popularity and high profile of his creation, Studdy himself preferred to live a secluded life. Occasionally he even struggled with the success of his own creation – either by being over-worked or by being inundated with endless demands from his fans. That said, the success of Bonzo allowed him to live rather comfortably, and his fondness for the dog can be seen simply through his desire to keep drawing him. Studdy was a man of simple pleasures, and he enjoyed nothing more than spending time drawing, taking occasional fishing trips and working away while enjoying his favourite brand of cigarettes.

Unfortunately, Bonzo's success could not last forever. While the small pup continued to be in high demand, the effects of The Great Depression were starting to be felt. As the global economy changed, there were now far fewer opportunities for little old Bonzo to make money.

While Studdy managed to continue to produce Bonzo work through this era, things came to an abrupt stop with the outbreak of World War II. Despite Studdy's age, he was still adamant to support the war effort in whatever way he could. During this period, he worked as a draughtsman at the Royal Naval Dockyard in Portsmouth. It was to be a fortunate posting as, while he was stationed there, his London home was bombed. Sadly, Studdy had left the majority of his original drawings at his home, and these ended up being either destroyed or looted.

After the war, the illustrator returned home with his wife, and the couple rebuilt their home. Sadly things never quite returned to normal. To make money, the illustrator was forced to diversify his output, and so he began to release risqué seaside postcards that he signed under the pseudonym 'Cheero'. Two years after this, he began to suffer chest pains. A lifetime of smoking, twinned with his recent time spent in the dusty atmosphere of wartime Portsmouth, had led to lung cancer. On the 25th of July 1948, the illustrator sadly passed away.

In his lifetime, Studdy had done amazing things. He had created a character that had made the whole world laugh, and, in doing so, he became one of the best-known illustrators of his day. His work set a precedent for what an illustrated character could be, and he demonstrated just how popular an illustrated creation could become. While Bonzo may have been a big influence on a culture for mass-marketed merchandise, he was also something much greater than that. He was a character who was much loved. To this day, he continues to attract new fans and new collectors all around the world. Not bad for a little puppy who was born almost one hundred years ago!

Bonzo: The Life and Work of George Studdy
First published in 1988, Paul Babb and Gay Owen's account of Studdy is perhaps the most comprehensive (and maybe only) published book about the illustrator's life and work. Boasting an impressive index that shows nearly all of Studdy's postcards, it's the perfect book for any Studdy collector – it was also a fantastic help when researching this piece.

Felix the Cat
Felix debuted in the short film Feline Follies in November 1919. In many ways, you can view the success of the American cat running in parallel with that of the English Bonzo. Arguably Felix was the first real cartoon superstar, and, to this day, he remains a mascot and pop culture icon.

The Poky Little Puppy
Janette Sebring Lowrey's book The Poky Little Puppy (1942) was America's biggest-selling hardcover children's book of the twentieth century. Illustrated by the Swedish-American illustrator Gustaf Tenggren (1896–1970), the book quickly became a firm favourite with millions of American children and is a testament to the timeless appeal of puppies.