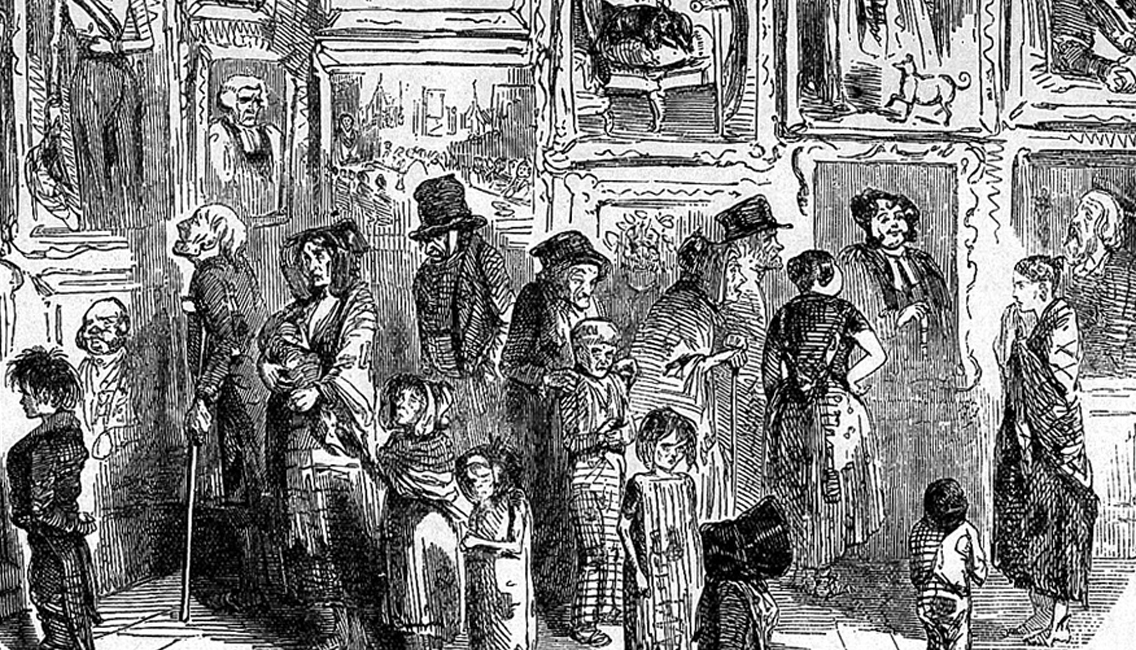 How Punch Magazine Changed Everything

It is hard to escape the legacy of Punch Magazine. From 1841 to 2002, the magazine cast a satirical eye on life in Britain. It charted the interests, concerns and frustrations of the country and, today, it stands as an invaluable resource for social historians. Over its one-hundred and sixty-one years, it carried articles from the likes of William Thackeray (1811–1863), P. G. Wodehouse (1881–1975) and A. A. Milne (1882–1956). It featured illustrators like H. M. Bateman (1887–1970), Ronald Searle (1920–2011) and Gerald Scarfe (b. 1936). It had a unique way of charting the events of the nineteenth and twentieth centuries. Sometimes it even shaped them.

In its formative years, Punch combined humour, illustration and political debate with a fresh and radical audacity. During its heyday in the late 1800s, it reflected the conservative views of the growing middle-classes and copies of it could be found in the libraries of diplomats, cabinet ministers and even royalty. In the Western world, Punch played a significant role in the development of satire. In the field of illustration, it practically revolutionised it.

Launched on 17 July 1841, the magazine was inspired by the popular Parisian papers of the day. The original idea came from an engraver called Ebenezer Landells (1808–1860). Landells was a huge fan of the satirical weekly Le Charivari and loved the magazine's use of wood engravings. He hoped that by producing a similar magazine he would have plenty of scope for producing his own work. While the idea was not new, there was enough money and talent in Fleet Street for it to at least seem worthwhile.

During the 1840s, London's Fleet Street was a hive of activity. It bustled with the sound of artists, journalists and publishers who all churned out the news. Scandal, blackmail and personal attacks were the order of the day and the pages of the satirical papers were filled with cruel caricatures that owed a debt to the legacy of Gillray (1756–1815) and Rowlandson (1756–1827). Yet, these types of works were soon to be a thing of the past. Queen Victoria had just taken the throne and, in her reign, came a new era of moral righteousness. Eventually, Punch was to take the lead; offering a type of savoury and wholesome humour that the Victorians loved. The magazine's success took some time to develop but the story of its formative years is certainly one that is most worth telling.

The early issues of Punch were more about politics than pictures. During the 1840s, the magazine was far more famous for its radical writing than its humour or illustrations. That said, each issue did feature 'Punch's Pencillings' — a full-page satirical drawing that appeared at the centre of the magazine. The task of illustrating this was given to a different illustrator each week and the subject of it was decided upon by a committee of writers and artists at the weekly editorial meeting.

In the early days, the magazine had a variety of illustrators working for it, including the likes of Kenny Meadows (1790–1874), Archibald Henning (1805–1864) and Henry George Hine (1811–1895). They were all solid draughtsmen who were formally trained and artistically skilled, yet their output was, for the most part, fairly unremarkable.

These early issues were unsuccessful. The magazine struggled to attract readers and, it wasn't until it released an annual called the Punch Almanack in 1842 that it finally struck it big. An even greater stroke of luck came through the hiring of John Leech (1817–1864). From issue four Leech became a staff contributor and his work gradually went on to define the look and tone of the magazine. Leech was a hard-working and meticulous illustrator whose images suited the tone of the publication. During his time at Punch, he produced some three-thousand drawings and, in the process, he gave us 'the cartoon' as we know it today. Prior to Leech, cartoons were not called cartoons. They were simply thought of as humorous drawings.

At a meeting for the issue of July 15 1843, it was decided that the target for that week's 'Punch's Pencillings' would be the upcoming exhibition of fresco designs for the not-yet-opened Palace of Westminster. The committee felt that this exhibition was a complete waste of public money. At the time, London was the London of Charles Dickens (1812–1870); it was a city of poverty, ill-health, slums and workhouses. An exhibition of competing rough designs for Westminster seemed like a pompous thing to do when the city had far more pressing issues at hand. The exhibition had been commissioned by the politicians and Punch saw it simply as a means for the elite to celebrate their own importance.

Leech was chosen to illustrate the piece and in his finished work, he depicted a group of poor and ragged Londoners visiting the exhibition. The huddled crowd look out-of-place amongst the grandiose drawings and it's clear that they find no comfort in the work. For those who know frescos, they'll know that a finished preliminary sketch is commonly known as a 'cartoon'. When it came to Leech choosing a name for this work he abandoned ‘Punch’s Pencillings’ and sprung for ‘Cartoon No.1 – Substance and Shadow'. The use of the word 'cartoon' ridiculed the pretensions of the establishment and lampooned their grandiose attitudes. The work was a success and, from that issue onwards, Punch's central political illustration was simply known as the cartoon. The popularity of the Punch cartoon led to the term's widespread use and Leech became known as the first ‘cartoonist’.

In the years that followed, Leech's work grew to be a huge success. He was not simply thought of as an illustrator at Punch — he was Punch. As R.G.G. Price describes in A History of Punch (1957) “at first Art was regarded as unimportant compared with the text, […] it was Leech who made the public look first at the pictures”. He was the reason that people went out and bought the magazine.

By all accounts, it would seem that Leech was a proper gentleman. In his early days, he found himself in jail for short periods of time, not on account of any wrongdoing, but after backing friends who could not meet their bills. The writer Thackeray said of him: “Mr Leech surveys society from the gentleman's point of view.” When he died in 1864 — aged just forty-seven — he was penniless. Neither his friends nor family knew where his money had gone. It was quite a shock as he had been earning an impressive £2,000 a year. When Benjamin Disraeli heard the news he was shocked. The Chancellor of the Exchequer (and future Prime Minister) was one of Leech's most lampooned subjects yet Disraeli was so fond of the man that he made sure that Leech's widow received a full Civil List Pension.

After Leech's death, the magazine was thrown into crisis. Many felt that it was inconceivable for the publication to go on without him. Thankfully, Leech's influence on illustration was strong and Punch also had a habit of breeding talent. Charles Keene (1823-1891) proved himself to be perfectly capable of continuing Leech's legacy. Admired by the likes of Degas and Whistler, his cross-hatched illustrations are arguably some of the most beautiful work that Punch ever printed. John Tenniel (1820-1914) was also able to fill the gap that Leech left. Best known as the illustrator of Alice's Adventures in Wonderland (1865), Tenniel succeed Leech as Punch's main political cartoonist.

Yet, the satire of this new wave was far more conventional than that of the past. Perhaps this is exemplified best by the fact that Tenniel had been among those chosen for the Westminster frescoes that Leech had lampooned just two decades earlier. At this point, Punch was no longer interested in attacking The Establishment — it had become The Establishment. Its humour was designed to appeal to Britain’s rising middle classes. At the time, these new cartoons were considered wholesome but by today's standards, many of them feel nasty and tasteless. Foolish women, silly servants and the stupid Irish were all typical targets for Punch, and these cruel clichés chimed with the country's belief that the British Empire was around to stay. Punch had become the smug superiors that it had once ridiculed.

From the superb to the insensitive, these cartoons form an invaluable resource for social historians. Over its one-hundred and sixty-one years, the magazine documented the changing face of British humour and played a central role in the formation of British identity. Yet, Punch's contribution to the history of illustration is arguably even greater. To study the magazine is to study the evolution of the cartoon itself. It chronicles the shift of satirical illustration from a reliance on caricature into an era of sophistication.

Leech put a name to what a cartoon is, and over the course of this project, we'll have an opportunity to see how cartoons have evolved. In many ways, it wasn't just the beginning of the cartoon that Punch brought us, it was also the beginning of a modern form of illustration.

This will not be the last time that we'll encounter the magazine in our chronicles. Our next stop will be a contemporary of Leech's, a man who played a pivotal role in the shaping of the magazine. His name was Richard Doyle and he was one of the most popular illustrators of the Victorian Era…

If you're eager to learn more about Punch, a complete archive is available to researchers as part of a fully-searchable digital archive compiled by Cengage Learning. The Online Books Page have also put together a fantastic archive listing where to find online editions. Finally, The Punch Magazine Cartoon Archive has lots of great resources and a good archive of cartoons that are well worth checking out.

The Cartoonists of Punch
Wikipedia has a fantastic list of Punch cartoonists through the years. If you want to learn more about the illustrators of Punch this is a great place to start.

Spitting Image
In 1984 the caricaturists' Peter Fluck (b.1941) and Roger Law (b.1941) teamed up with the illustrator Martin Lambie-Nairn (b.1945) to create the satirical TV puppet show Spitting Image (1984–1996). The show caricatured celebrities, politicians and royalty.