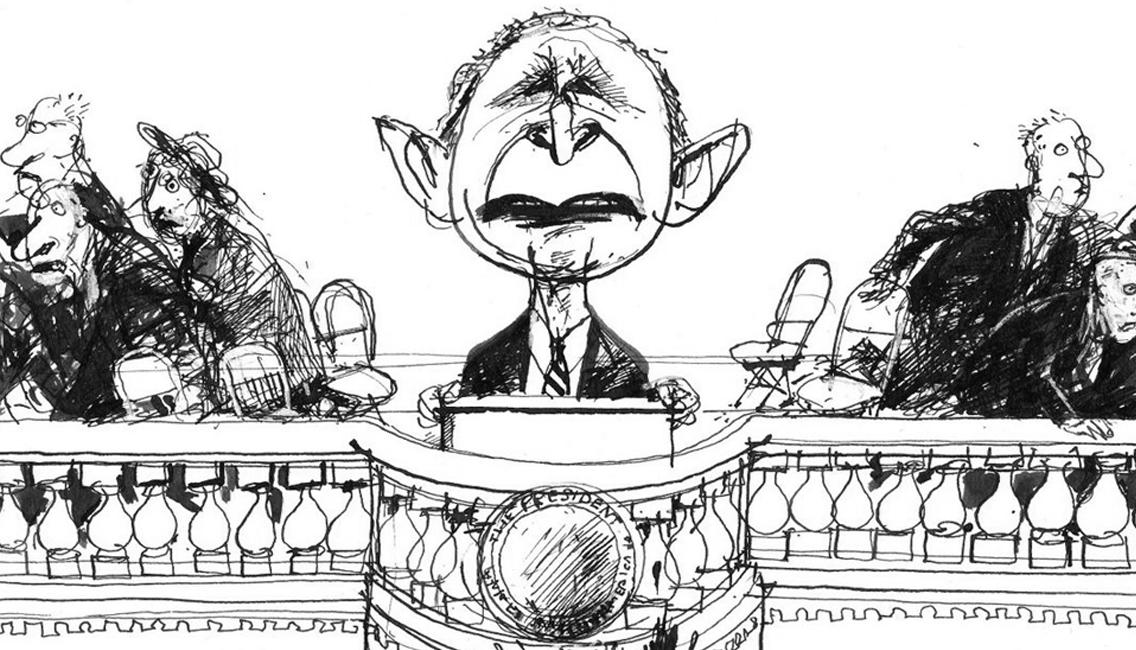 How Richard Thompson Made the Pie Higher

If you were online back in 2002, you may well have encountered 'Make the Pie Higher' — a popular satirical poem that was pieced together from some of George W. Bush's most incoherent quotations. From message boards to forwarded emails, the poem quickly spread through the web and became one of the best examples of 'Bushisms' at the time.

Written by Richard Thompson, the work first appeared in the Washington Post as part of the illustrator's weekly series 'Richard's Poor Almanac'. Since 1997, Thompson had been contributing to the newspaper's style section with a collection of irreverent, whimsical and often eccentric cartoons.

Each week he would attempt to find inspiration for his cartoons through news stories and topical events. During the week of Bush's inauguration, he discovered that the soon-to-be President had decided against having an Inaugural Poet at the ceremony. Thompson thought this odd, and so he decided to compose his own poem in response. Taking a series of malaprop comments from Bush, he pieced them together into a sort of free-verse poem and topped it off with an exquisite caricature. The finished work is a wonderful combination of wit, style and satire.

During the twelve years that the 'Almanac' ran in the Post, Thompson's cartoons were always unique and unpredictable. For his editor, Gene Weingarten, that was always the appeal. “'Richard's Poor Almanac' had absolutely no structure”, he said in the wonderful 2014 documentary about Thompon's work. “It was a download from the incredible mind of Richard Thompson. A taste of humanity.”

In the book The Art of Richard Thompson, the cartoonist explains that “The ideal cartoon [for the 'Almanac'] was made up off the top of [his] head with no research; with only its own comic logic holding it together”. That's not to say that 'Make The Pie Higher' isn't researched. In fact, one can find a fairly in-depth dissection of the work online that verifies nearly all of its quotations.

Through his work with Richard’s Poor Almanac — and specifically with the Bush cartoon — Thompson's work caught the eye of the editors at Andrews McMeel. This led to his acclaimed daily comic strip Cul de Sac. Running in more than one-hundred and fifty worldwide newspapers, this comic brought Thompson much love and acclaim and led to him winning the National Cartoonists Society's world-renowned 2010 Reuben Award for Outstanding Cartoonist of the Year.

Sadly, in 2012 Thompson was forced to retire following a diagnosis of Parkinson's disease. It was a reluctant decision for him, and he greatly lamented the fact that his strip had to end. For Thompson, his characters still had so much more to say.

In 2014 the director Bob Burnett put together a wonderfully heartfelt documentary that pays tribute to Thompson’s life and work. Called The Art of Richard Thompson, the film can be viewed for free online. Meanwhile, Thompson's work continues to live online with GoComics offering full and free archives of both Cul de Sac and Richard's Poor Almanac. If you're a fan of good-natured comic strips and playful satire, then these resources are bound to bring you hours of joy.

This essay forms the final part of a series that has been exploring satire in illustration. At the beginning of this series, we looked at how satire started to take root after the birth of print. We saw its development through the growth of magazines and newspapers and witnessed examples of the many forms that cartoons and caricatures have taken over the last 175 years.

In many ways, it feels rather fitting to end this series with Richard Thompson and 'Make the Pie Higher'. As print media enters the information age, so too does the world of satire. The viral success of Thompson's poem in the early 2000s is exemplary of a new era for satire. These days, we're far more likely to turn to the web for our topical humour than to print media. Satire has taken to the digital age with ease and aplomb, bringing with it a barrage of memes, tweets, likes and up-votes.

Today a new generation of illustrators are emerging who are continuing the legacy of illustrated satire. While we may be entering an age of endless content and finite attention spans, these people are stopping, reflecting and questioning the society that surrounds them. In many ways, satirical illustration feels more urgent than ever before. I, for one, am hopeful that its legacy will continue...

∼ Endnote ∼
This essay was originally published in May of 2016. On July 27th, 2016 Richard Thompson sadly passed away due to complications from his Parkinson's disease. He was fifty-eight years of age. He will be greatly missed and fondly remembered.

The political cartoons of Pat Oliphant
Arguably one of the most influential political cartoonists in the world, Oliphant (b. 1935) has drawn half a century of American leaders. The book Oliphant's Presidents: Twenty-Five Years of Caricature is a good starting place for those interested in his work.

Barry Blitt's controversial Obama inauguration cartoon
Presidential inaugurations tend to be a good place for some lighthearted satirical fun unless, of course, you're Barry Blitt (b. 1958). In 2008 Blitt received heavy criticism from both the camps of McCain and Obama after the publication of an infamous New Yorker cover that depicted a turban-wearing Obama fist-bumping his gun-toting wife in the Oval Office beside a burning American flag!