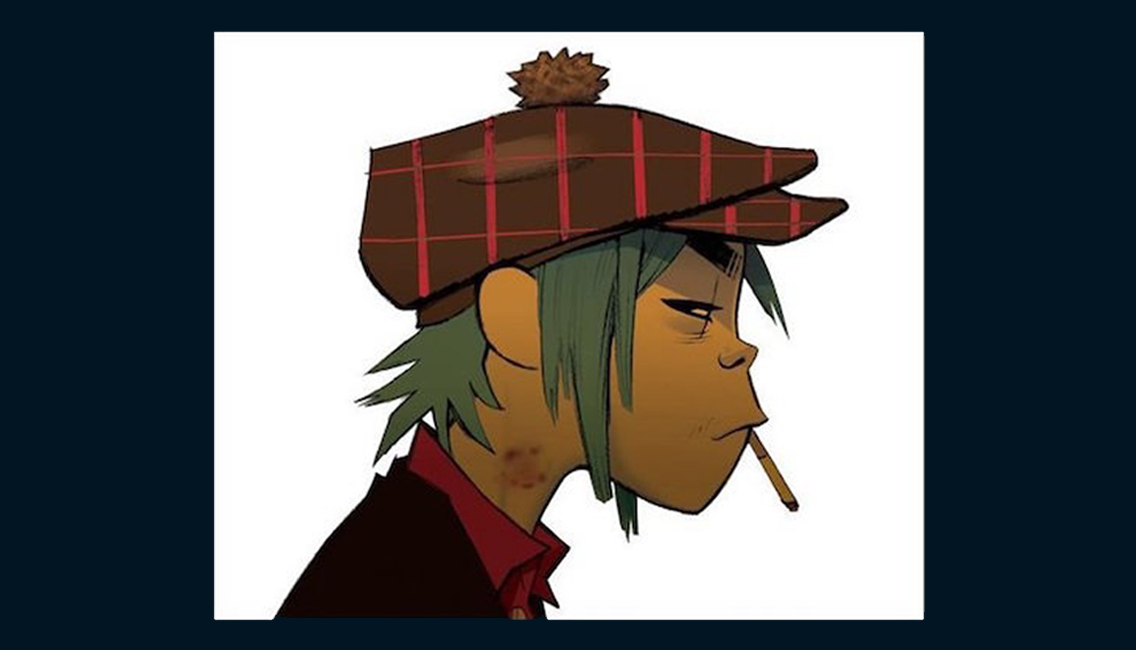 Jamie Hewlett, Gorillaz and the Enduring Evolution of Pop

In a decade defined by its own uncertainty, it seems somewhat fitting that one of the most influential and progressive albums from the early two-thousands would come from a band that didn’t exist. While virtual bands had been around long before Gorillaz, none had ever quite seen their level of success. What was it that marked this fictitious four-piece out? Why did an illustrated band feel so relevant during the noughties? What advantages came from hiding behind a cartoon?

The story of this group dates back to the late-1990s when Blur’s Damon Albarn (b. 1968) found himself sharing a flat with the illustrator and cult-comic artist Jamie Hewlett (b. 1968). Both had just come out of long-term relationships, and they were dragging themselves through life with late-night parties and an endless diet of MTV. As the station churned out a host of homogeneous acts, the two grew ever more frustrated with the growing monotony of manufactured music. One night they decided something had to be done to change it. Their answer was Gorillaz.

Pop’s relationship to fictitious bands dates back almost sixty years. Arguably, the first virtual band was Alvin and the Chipmunks. Their novelty record from 1958 was a huge success, and they proved listeners were happy to get on board with a band that wasn’t real. Soon after them came groups like The Archies and Josie and the Pussycats; even real-life acts like The Beatles, The Jackson Five and The Osmonds turned to cartoons as a means to reinvent themselves. Despite these examples, it wasn’t until Gorillaz that the true potential of a virtual band was properly realised.

When their self-titled debut emerged in 2001, it sold an impressive six million copies, and the band quickly became the most successful virtual band in the history of music. Hewlett’s work wasn’t limited to simply illustrating the cover. The release came with a host of magazine covers, press appearances, music videos, cartoon clips, live projected performances and an animated website. This was all in the year 2001 – a time when ninety-three percent of the world still had dial-up internet. This wasn’t simply a few pictures rattled out by the illustrator. It was a full blown viral marketing campaign – quite possibly the first to happen in the history of music.

At the time, the media were delighted to go along with the satirical nature of a cartoon band. Hewlett and Albarn’s confrontational characters served as a welcome distraction from reality TV, mass-produced boybands and the ever-growing popularity of celebrity culture. Their emergence came at a time when postmodernism had permeated the mainstream, and Gorillaz unapologetic artifice felt refreshing in a world that was slowly submerging into the murky depths of hyperreality.

While the illustrated existence of 2D, Murdoc, Russel and Noodle may have brought the idea of manufactured music to its logical conclusion, its irony was that their invented reality felt far more authentic than many of their musical rivals. “Gorillaz may not be real,” Hewlett told The Guardian in 2001, “but they are no less so than the caricatures that are Marilyn Manson and Eminem”.

While the concept behind their first album had critics amused and entertained, many had felt it was to be a one-off stunt. A virtual band was a clever idea, but surely the idea wasn’t able to stretch to a second album. Eager to prove critics wrong, Hewlett and Albarn teamed up again and attempted to repeat the process. The resulting work was Demon Days – a series of musical collaborations that were carefully wrapped around Hewlett's singular aesthetic. Released in 2005, it was dark, experimental and ambitious. It mixed genres and styles effortlessly, and Albarn's collaborations merged into one sprawling pan-global experience. It demanded the band be seen as more than just a gimmick. Hewlett and Albarn were clearly insisting Gorillaz were a legitimate act.

With all that said, in the four years between albums, changing trends in culture began to affect the band. While their postmodernist posturing had felt novel – even inventive – at the start of the millennium, by 2005 things were beginning to change. The taste for irony and pastiche had changed and it all felt a little old-hat. Thankfully Gorillaz had more longevity than many people had assumed. Their real strength lay in their malleability. While musicians tend to have an implicit duty to realness, the beauty of an illustrated act comes from their ability to adapt. For their second album, their true strength lay not in their image, but in the facade that they provided for the music.

Looking back on the decade now, anonymity seems to feel like a consent concern for musicians during this time. The Knife wore Venetian masks; Animal Collective wore Halloween costumes; even acts like Daft Punk and MF Doom continue to wear helmets and masks to this day. While all of these acts have their own reasons for remaining anonymous, it is certainly legitimate to argue that their secrecy can feel far more authentic than the crude attention-seeking industry of contemporary celebrity. Anonymity is a clever way to subvert the typical egotism associated with the music world. Without ego, nothing can distract from the message.

With Gorillaz, Hewlett’s illustrations liberated Albarn. They provided a means for the attention to be removed from him, and allow for the focus to fall on what was being said. While his characters brought coherence to the band, their playfulness also allowed for darker themes to break through within the parameters of mainstream pop.

Demon Days is an album heavily concerned with the state of the world. A decidedly bleaker record than their debut; it explores concerns around the environment, global conflict, and mankind’s imminent self-destruction. Released during a year that not only saw a war in Iraq; hurricanes in America; and bombings in London – but also a year that saw an earthquake in Pakistan; a terrorist attack in Bali; and the devastating effects of the Indian Ocean tsunami. It would be hard to find another album more in tune with the concerns of its time. Not bad for a band initially thought of as a gimmick.

If we look at Gorillaz in the broader context of the time, we can also see how they have continued to develop and evolve throughout the information age. For example, in the year that they released their debut album, Apple unveiled the iPod. Demon Days was released in the same year that digital tracks outsold physical singles. By the time their third album – Plastic Beach (2010) – was released, nearly three-quarters of all independent music shops had closed in Britain. The story of Gorillaz runs parallel with the rise of digital music.

Many have lamented the fact that the digital revolution has brought about the demise of the record sleeve. Personally, I feel less sentimental about it. The work featured recently on this site has demonstrated the important role that illustration has played within music – but it has also highlighted the medium’s constant ability to change and shape around its prevailing culture. For me, Hewlett’s work feels emblematic of this adaptability.

To assume that the album cover could be killed off solely by digital music is a disservice to what an album cover was. For many, a great cover epitomised all that was good within popular art. Record sleeves provided a gateway into new worlds – places far removed from the humdrum mundanity of the adolescent bedroom. An album cover could encapsulate the ideas and imagination of a generation and to identify with a record sleeve was a means to feel part of an exciting communal culture. The digital age has taken these qualities and transformed them into fully-fledged social experiences.

Hewlett’s work with Gorillaz demonstrates this transformation perfectly. While I may feel that the band’s greater strength lies in the smokescreen they provide for Albarn’s musical collaborations, many would contend that the mythology of the band is far more interesting. For one, you only need to look at the comments on YouTube, Instagram, Reddit or any other social media site to see a whole community of fans investing in – and dissecting – the virtual world of Hewlett’s creations. At a time when culture is placing a stronger emphasis on engagement and storytelling, Hewlett’s virtual band seems to have managed to carry itself through the tail end of post-modernism, and effortlessly slotted itself into the current cultural zeitgeist.

As the line between our digital and physical worlds continues to blur, the conceit of a virtual band may still continue to carry relevance. Gorillaz has always been an opportunity for Hewlett and Albarn to experiment and, more often than not, their ideas hit the target. At the point of writing this in 2016, there is currently the promise of a new album scheduled for next year. I’m intrigued and excited to see what the future might hold for the world's most successful illustrated band. Chances are that it should be something special.

The cartoons of Carl Giles
Hewlett often cites the British cartoonist Carl Giles (1916-1995) as an influence. His highly intricate illustrations certainly hold a resemblance to the detailed work of Gorillaz and, while his humour may be gentler in tone to Hewlett's, there's no denying that it also has its own subversive moments.

The lively illustrations of Jack Davis
Best known as a founding member of Mad Magazine, Davis (1924-2016) worked on film posters, record covers and numerous comic books. His work bounces with similar energy to that of Hewlett's, and his detailed illustrations are a benchmark in American humour.

The comic-book art of Brendan McCarthy
Arguably one of the most underrated comic creators of all time, Brendan McCarthy's work is quirky and psychedelic. Both Hewlett and McCarthy spent some time at 2000 AD, and it's clear to see that they both share a liking for surrealist post-apocalyptic imagery.