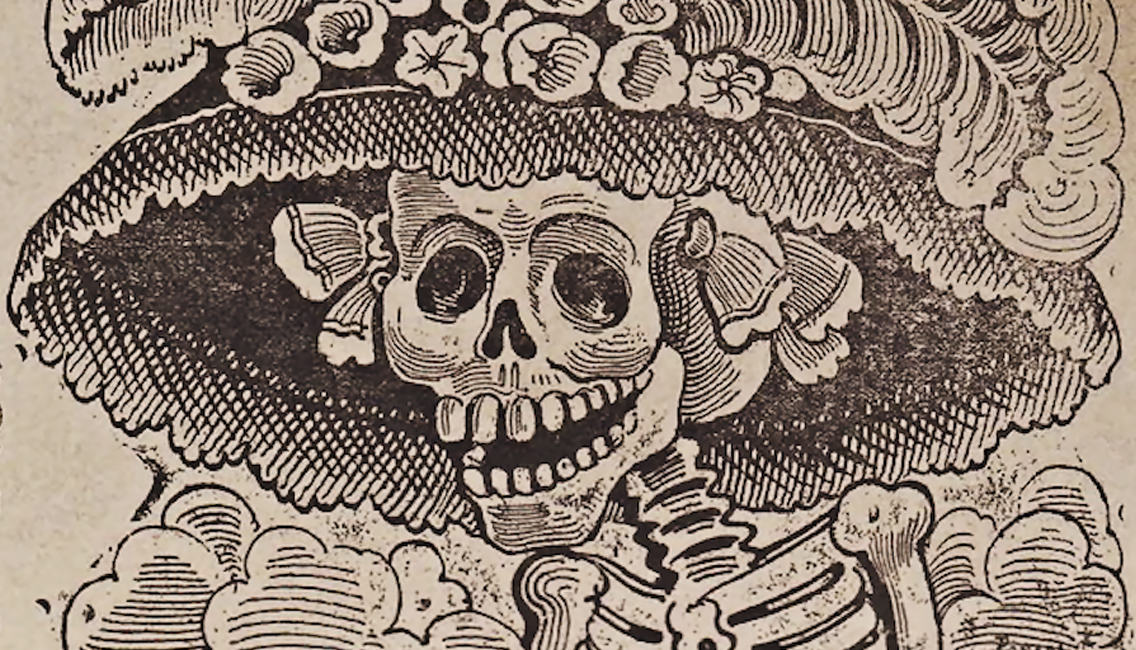 The Day of the Dead — or Día de Muertos — is a holiday that is celebrated in Mexico every year. Beginning on 31 October — and running until 2 November — the holiday encourages families to come together, and remember those they have lost. It is a time for prayer, celebration and spiritual journeys. If you find yourself in Mexico at this time of year, you are sure to encounter beautifully decorated altars called ofrendas, Mexican marigolds called cempasúchil and the iconic skulls that they call calaveras.

From old Aztec ruins and colourful masks to modern graffiti and skull-shaped confectionery, calaveras are an important symbol of Mexican culture. They serve as a reminder to enjoy life and embrace mortality. The calavera is a way of acknowledging that life is sacred and that death is a rite of passage. In Mexico, the inevitable should not be feared or avoided but faced with smiles and celebrations. For this reason, the calavera plays an important role during Día de Muertos.

The most famous calavera is called La Calavera Catrina. Rooted deep within the Mexican psyche, Catrina is considered to be the personification of Día de Muertos. She was created in 1910 by José Guadalupe Posada (1852–1913) and is arguably the country's quintessential image of death.

Posada was Mexico's most illustrious illustrator. A political cartoonist and engraver, he worked tirelessly for over forty years, producing illustrations for periodicals, newspapers, novels, cookbooks and songbooks. Posada lived during one of the most turbulent times in the country's history. He saw his country fall victim to heinous repression and corruption under the dictatorial reign of Porfirio Díaz. This era was also a time of technological progression and modernity. Advancements in printing allowed for street literature to grow and, thanks to this, Posada's illustrations flourished.

He is best known for the work he published in broadsides. These were large one-sided publications that were printed on very cheap newsprint and distributed all throughout the country. They were immensely popular, and they brought Posada's work to a large audience. In the decades before the Socialist revolution of 1910, millions of everyday people were enlightened, educated and entertained by Posada. Often his illustrations were accompanied by sensationalist stories, but even those who couldn't read would buy the broadsides just to see Posada's work.

Today, Posada is best remembered for his amusing and often satirical calaveras. During Día de Muertos celebrations, Posada would work hard to produce work featuring these skeletal figures. In pre-Columbian times, images of skulls and skeletons often represented rebirth into the next stage of life. In Posada's hands, these traditional symbols took on a new life and became a way to make social and political critiques.

Sometimes his calaveras would appear as vain skeletons — dressed in the clothes of the wealthy and performing everyday activities like riding bicycles, playing the guitar or taking the tram. Sometimes they were an instrument of celebration — presenting sympathetic portraits of peasants, heroes and revolutionaries.

Posada created his iconic Catrina in 1910, just as the revolution was beginning. The image — often known as 'The Skull of the Female Dandy' — is a zinc etching that shows a grinning skeleton with a fancy feathered hat. This type of hat would have been common among the upper-classes. During the time in which it was made it would have been common for some members of Mexican high-society to whiten their skin with make-up and adopt aristocratic ways. Becoming more European was a common aspiration for the over-privileged. As the revolution began, Posada created a sort of satirical obituary for this portion of society.

The original work was published on a broadside along with a poem. Humorous poetry is quite common during Día de Muertos, with poems known as literary calaveras written to remind the living of their own mortality. For Posada, death was the great equaliser. He is known to have said that “death is democratic”. No matter your colour or creed, your wealth or your poverty, everyone ends up as a skull in the end.

Tragically Posada was largely forgotten by the end of his life. He died in poverty and was buried in an unmarked grave. Satire, by its very nature, is ephemeral; and Posada's work was no exception. Printed on very cheap paper, it meant that only a small collection of his images remain. Yet, thankfully, he found veneration through a number of other artists that emerged in Mexico after the revolution. They recognised his contribution to the art of engraving, and saw how he had shaped the visual language of Mexican art and illustration. In many ways, Posada was a revolutionary. He helped to establish a national art that was independent of European tradition and that was built around a language of indigenous symbols and motifs. Today humorous political cartoons and satirical comic strips are incredibly popular in Mexico and, for many, Posada is often considered to be the founding father of the genre.

As time went on, many artists have paid tribute by incorporating Posada's imagery into their own work. Perhaps the most fitting tribute can be seen in Diego Rivera's (1886–1957) work Sueño de una tarde dominical en la Alameda Central (1948) ('Dream of a Sunday afternoon along Central Alameda'). Here, the artist celebrates four hundred years of Mexican history in a fifteen-meter long mural that is populated by major figures from the country's past. Front and centre stands Catrina holding arms with Posada.

José Guadalupe Posada lived during one of the most turbulent times in the history of his country. The subversive nature of his work lies in its macabre humour, and this makes his illustrations just as compelling today as when he first drew them. His work remains a testament to the Mexican spirit. It is filled with life, humour and an unshakable sense of rebellion. So viva la calaveras and viva José Guadalupe Posada. Long live the dead!

The woodcuts, linocuts and lithographs of Leopoldo Méndez
Considered to be the finest printmaker in the history of Mexico, Leopoldo Méndez's (1902–1969) work sympathised with the ideals of the Mexican Revolution and heavily opposed the country's rise of fascism. Today he is recognised by many as Posada's successor.

Duncan Tonatiuh's Funny Bones
In 2015 the Mexican/American author and illustration Duncan Tonatiuh published Funny Bones, a children's picture book that tells the story of Posada's life and introduces young readers to the world of calaveras.