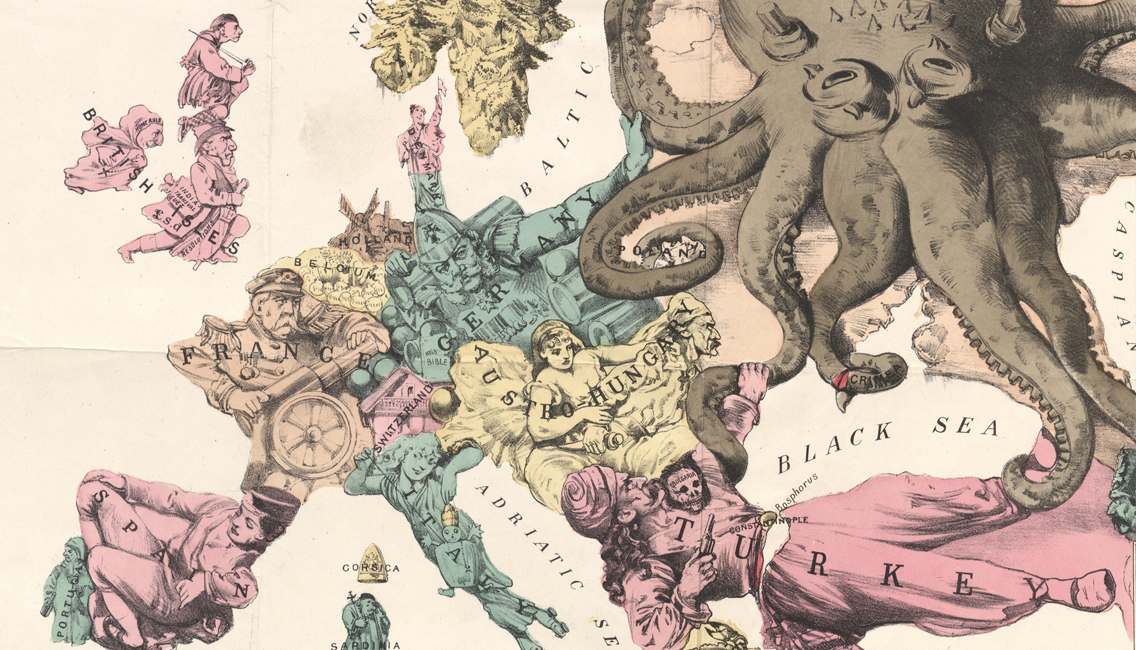 Europe in the 1870s was a time of great political tensions. Imperialism and nationalism were on the rise, and many countries seemed eager to display their military strength. In Turkey, things were turning volatile. The expense of the Crimean War (1853–1856) had forced the Ottoman Empire to greatly increase taxes, and this led to a rising cry for independence from within their territories in the Balkan peninsula.

By 1875 this outrage had turned to violence, with uprisings and war with Bulgarian, Romanian, Serbian and Montenegrin rebels striking out against Turkish rule. This was to be known as the Great Eastern Crisis. It brought a wave of uncertainty to Europe – with many countries looking eastward, knowing well that this new instability presented a great opportunity for Russia to intervene and gain some new territories after the loss it had experienced against Turkey in Crimea.

This moment of anxiety is captured perfectly in a cartoon map by illustrator Fred W. Rose (1849–1915). Created just two months after the outbreak of the Russo-Turkish War (1877–78), his Serio-Comic War Map is a masterpiece of visual storytelling. Drawing each country as a cartoon stereotype, Rose used their borders to give form to a series of interlinked narratives. Russia – the octopus – dominates the scene. Its wild and erratic tentacles eagerly pushing outward, causing havoc and disarray all over Europe.

In Rose's eyes, Russia had already forgotten about the wound it received in Crimea. Slowly, it draws its tentacles around Turkey, who only has a small pistol to defend itself. Bulgaria is shown as already dead, while Poland is in the throws of breathing its last. Hungary is depicted as eager to help its neighbour, but Austria holds it back. Is this a lovers quarrel within the new Austro-Hungarian union? What other narratives are hidden within this scene?

To the west of this action, we see France checking its weapons. Rose draws the country with a look of apprehension – perhaps due to the country's recent defeat in the Franco-Prussian War (1870). Meanwhile, Germany looks more confident. It acts neutral in this situation but stays alert – keeping a close eye on the movements of France. Between both of them sits Belgium – a new colonial player on the world map. Its king stands surrounded by bags of money. Even in a busy scene like this, Rose has room to include a reference to the country's control of the Congo and the threat it might pose as a new colonial power.

Meanwhile, Britain is presented as the eager observer, with Rose choosing to depict it in the form of William Gladstone (1809–1898). Here the country is shown as being concerned yet reserved – Britain is a confident figure amidst the chaos of Europe. Yet even in this small portion of the drawing other narratives appear. Ireland, shown as devoutly religious, looks at first to be content – happily following alongside its British ruler. Yet look closer, and you can see that Home Rule is on its mind.

Rose also draws Britain carrying a note that reads: 'India Transval Suez' [sic]. This is a reference to British colonies and, in particular, the recently constructed Suez Canal (1869). This was a project that had a dramatic effect on the world – particularly in terms of world trade and the colonization of Africa. The Suez Canal also served as Britain's main communication line to its powers in India. If the Ottoman Empire fell to Russia, then Britain could lose access to the Suez and no longer hold such a valuable asset during an era that was being shaped by the greed of imperialism. It was important for Britain that the octopus didn't win.

When Rose's map was released, it was an instant hit. In fact, the first edition sold so quickly that a newly revised version was published the very same year (above). In the BBC series, The Beauty of Maps (2010), writer Mike Parker explains the success of these creations: “They impart opinion and information all at the same time; in a way that is visually very striking and quite beautiful”. Parker describes these maps as being very much a product of their time. “Rose was doing these maps at the zenith of the British Empire,” he says, “[they] just shored up the Victorian sense of who we are and our place in the world.”

Rose's work arrived during a time when Britain had become obsessed with cartography. The country's Ordnance Survey was busy mapping the nation while colonial and imperial interests abroad made citizens eager to understand Britain's place in the world. Rose's playful creation worked as a map and as a news article. It was both a biting piece of political satire and a genius work of visual storytelling. While Rose may not have been the first illustrator to create work like this, the mass appeal of the map (alongside its use of cutting-edge printing technology) made it a significant creation in the history of map-making.

At the time of its creation, Rose had been a twenty-seven-year-old junior clerk at the Legacy Office of the Inland Revenue. Despite the success of his illustration, he maintained his role as a civil servant for the rest of his life – going on to become an assistant principal at Somerset House. In his spare time, he enjoyed writing, painting and travel.

His serio-comic creation influenced a whole new wave of satirical maps and even a number of derivatives. Rose himself continued to moonlight occasionally as a comic cartographer, yet it would seem that he saw himself more as a man of ideas rather than as a serious illustrator. Some of his later creations credit him only with the design – while the illustrations themselves were done by the illustrator Matt. B. Hewerdine.

In his later maps, Rose continued to use his original troupe, and while some of the work focused solely on Britain, his main interest seemed to remain that of his country's place within Europe. His 1899 map, for example; (Angling in Troubled Waters – seen above), uses a fishing metaphor to suggest the ease with which Britain could colonize other countries in comparison to its clumsy European neighbours.

The following year he produced John Bull and his Friends (1900). This was a modern adaptation of his 1877 map, and it showed how the political landscape had changed in the intervening years. While the Russian octopus continued to spread its tentacles into Europe, the direction in which Rose's anthropomorphised countries faced had changed. For Rose, Europe looked to Britain, who he personified as John Bull. His country was a huge colonial power – highly militarized, rich, and holding strong ties with Uncle Sam. Rose was proud to be British – and he proudly made propaganda that celebrated his country.

The continuous rise of nationalism, twinned with the world's growing access to mass media, was forming a new era for this type of propaganda. A little more than a decade after Rose had made this map, Britain found itself in a war with Germany. Both governments were quick to adopt large-scale propaganda campaigns that could justify, persuade and build hate. A whole generation of illustrators had proven that these popular images held power, and the Government knew that to control a war, you also needed to control the images. Rose's maps mark the beginning of this whole new era...

Zoomorphic maps
Cartographers have not just limited themselves to finding the shapes of people in counties; they have also enjoyed finding shapes of animals too. As highlighted here before, animals have often been utilized as a way for image-makers to label something as uncivilized or barbarian. In Rose's map, we see Russia as the only non-human character. This is just one of countless examples of where animals have been used to criticise someone or something. Further map examples can be seen in this great article from the British Library.

National personifications
Outside of maps, illustrators have also given form to countries and their people through personifications. From Uncle Sam to John Bull, these characters have appeared in everything from propaganda posters to satirical cartoons. A directory of each country's personification can be seen here. An essay on Uncle Sam most iconic appearance can be read here.