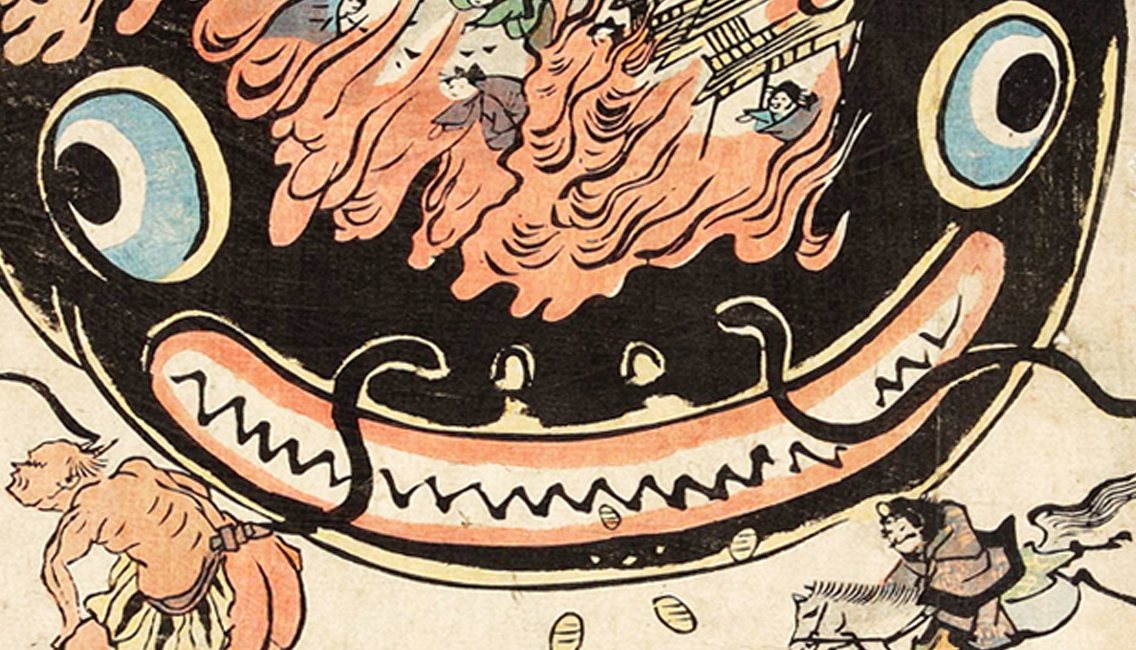 When Giant Catfish Shook The Earth: The Namazu-e Prints

On the 11th of November 1855, a massive earthquake hit Japan. The city of Edo – now present-day Tokyo – was in ruins. More than seven thousand people died, and at least fourteen thousand structures were destroyed. The event was known as the Great Ansei Earthquake, and within days of its occurrence, a collection of hastily printed broadsheets and images started to be sold on the streets of the city.

As days turned into weeks, nearly four hundred varieties of earthquake-related prints were available to buy. The majority of these were known as namazu-e – a new type of colour woodblock print that featured depictions of a mythical catfish known as Namazu. This mythological creature was said to have lived under the islands of Japan, where it was guarded by the Thunder god Kashima. When Kashima let his guard down, the giant catfish would thrash about and cause large earthquakes to happen.

These popular namazu-e images form a small but fascinating sub-genre of ukiyo-e prints. They provide us with a window into the consciousness of Japan at a time when the country was edging ever closer to immense political and social change. For the people of Edo, this earthquake was seen not as some random event but, instead, was seen as an act of yonaoshi (a type of rectification). The country had already had two great earthquakes the year before, and many had felt that Edo had become a complacent society. The violent rumbles of Namazu served as a way to shake up a world that had slipped into imbalance.

Namazu-e were typically unsigned, and today they remain the work of anonymous illustrators. Often these images hold a political subtext, and during an era of strict military governance, keeping a low profile was a smart move.

Many believed that Namazu had unleashed its destruction after Kashima had left town and put Ebisu (the god of commerce and fishing) in charge. Below you can see a print depicting Ebisu asleep while overhead the giant catfish unleashes destruction on the city. Kashima rushes home on horseback while fires rage and people run in horror. The deity Raijin (another thunder god) is seen here too. He farts on the head of Ebisu. This was a common trope in ukiyo-e prints, and we can see coins blowing about in these ‘winds of change’. These coins symbolise the redistribution of wealth that many residents of Edo had hoped might come through the rebuilding of the city.

Money is a continuous theme within namazu-e. While everyone viewed the earthquake as a tragedy, many also saw that it would bring work opportunities. Those within certain occupations could profit from the disaster, and this is often explored through these illustrations.

For example, below we can see Namazu engaged in a game of tug-of-war against Kashima. Behind Kashima stands the victims of the earthquake while behind Namazu stand a group rooting for the catfish. This group consists of construction workers, firemen and even publishers – all professions that could profit from the catfish's destructive nature.

In another example, we can see Edo divided quite literally in half by Namazu. At the top are those who have viewed the event as an opportunity. The illustrator has labelled thirty distinct occupations on both sides of the divide. There is a tiler, a carpenter, a physician, even a prostitute – all of these will gain work from the disaster. Meanwhile, the group below are in tears. Their professions are in ruin because of this earthquake. Amongst these can be seen a tea-house proprietor, a diamond seller and a variety of entertainers. Again, Kashima appears with a sword. He is stabbing Namazu and reclaiming power.

The namazu-e craze was a phenomenon. Some bought the prints for their humour and social commentary; others believed that buying them provided some kind of protection against future earthquakes. Many felt that by choosing to invite images of the Namazu into your home you were in some way befriending it or making peace with it. Others believed that by showing Kashima’s might over the creature you reasserted your faith in the god and insured that you would be protected by him. Either way, the namazu-e prints took on a sort of talismanic quality, and hundreds of Edo residence bought them with the hope of avoiding future earthquakes.

Yet, this craze did not last long. Two months after they had first appeared, the prints abruptly disappeared. The government quickly realised that these images allowed the common people of Edo a means to articulate their opinions, views and visions for an alternative society. Fearing repercussions, they cracked down on production and strict censorship was enforced. To this day, only a handful of namazu-e prints remain.

Yet, the legacy of this work should not go underestimated. These illustrations highlight the divisions caused by money and express personal concerns regarding a complacent nature within Japanese society. It is not unrealistic to believe that these illustrations played a sizeable role in helping to destabilise the government and help bring about its eventual collapse twelve years later.

As for Namazu, his power faded mainly into a time of myth and folklore, but his image still manages to prevail. As earthquakes remain a concern for Japan, the catfish now appears on many of their emergency machines, devices and apps that they used to protect the country. Perhaps, like most things, it is hard to let the past go completely.

Johann Michael Roth's engravings from the 1755 Lisbon earthquake
In 1756 the German engraver Johann Michael Roth released a collection of prints called Wurzburgische Sammlung. This book contained images of the earthquake that struck the Portuguese capital, and it offers an amazing insight into the destructive power of the event.

The illustrations of the Great Kanto Earthquake
In 1923 a massive earthquake struck Yokohama and Tokyo. Illustrators like Unpo Takashima and Kougai Noguchi were there to capture scenes of its destruction. Their woodcut prints provide an amazing insight into the terror and spectacle of what occurred.

Jave Yoshimoto's Disaster (2012)
From 2011–12 the artist and educator Jave Yoshimoto created an artwork based on the catastrophic events of the 2011 Japanese earthquake. Entitled Disaster, the work was inspired by the eighteenth century woodblock prints of artists like Hiroshige and Hokusai. Spanning one large 30-foot long scroll, the final image honours those who lost their lives and livelihoods in the disaster.