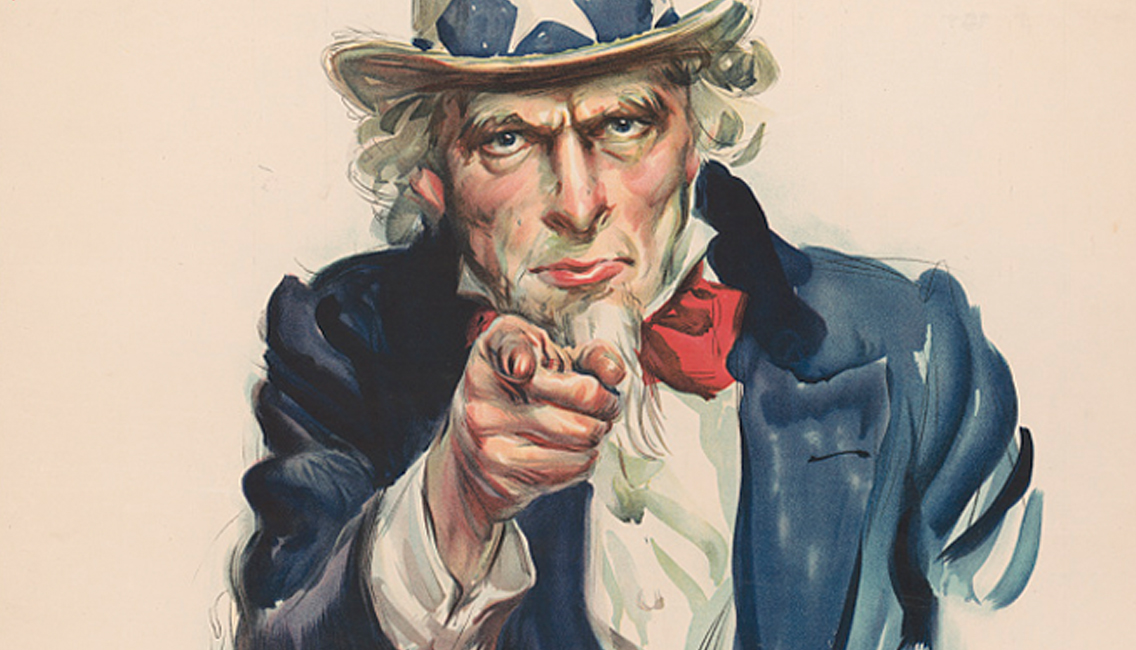 “I Want YOU!” – The Story of James Montgomery Flagg’s Iconic Poster

The top hat, the goatee, the burning eyes and that long accusing finger – the "I Want YOU!" poster has become one of the most iconic images in American history. Used by the U.S. Army to recruit troops during the First World War, this image transformed the character of Uncle Sam into a stern and powerful figure. His persuasive pose and marked demeanour proved to be a hugely effective tool during the war, and a staggering four million copies of it were printed between 1917 and 1918.

While the poster continues to be recognised the world over, its creator's name has not fared quite as well. Born in New York in 1877, James Montgomery Flagg was a hugely prolific illustrator who – at the peak of his career – was said to have been the highest-paid magazine illustrator in all of America. Talented from a young age, Flagg had sold his first illustration at the age of twelve. By fourteen, he had become a regular illustrator for Life, and two years after that, he joined the staff of its rival publication Judge.

Flagg was an outspoken man who didn't suffer fools gladly. An unapologetic fan of fast cars and beautiful women, he took great pleasure in his work and, in return, it brought him fame and fortune. He lived the life of a bohemian, mixing with celebrities and sycophants and earning a reputation for being one of the most colourful and cantankerous characters of his day.

When the war broke, Flagg was thirty-nine years of age and so was too old to enlist. Instead, he volunteered his skills to the Division of Pictorial Publicity (DPP) – a group initially established by the illustrator Charles Dana Gibson. The DPP had grown out of an effort to use illustration as a means to promote the war effort, and it was quickly absorbed into Woodrow Wilson's Committee on Public Information. At its peak, it held over three hundred illustrators in its ranks; including the likes of Howard Chandler Christy, N.C. Wyeth and even a young Norman Rockwell.

Flagg – who had already created the "I Want YOU!" image for a July 1916 issue of Leslie’s Weekly – produced forty-six posters for the DPP's war effort, many of them featuring the character of Uncle Sam. For Flagg, the use of this national personification was the ideal tool for propaganda – and while images of Uncle Sam had existed since as early as the 1800s, it was Flagg's version that cemented the identity that we think of today.

Flagg saw little issue in borrowing images and ideas from other artists, and he did this frequently. “How well the idea was handled was far more interesting to him than its origin” noted Susan E. Meyer in her 1974 biography of the illustrator. His fondness for appropriation is particularly clear when comparing his Uncle Sam poster to Alfred Leete's poster Lord Kitchener Wants You from 1914. Here, Flagg has simply replaced the British War Secretary with Uncle Sam, and – while the illustrator never denied or admitted the similarity between the two works – the resemblance is clearly evident.

At the time, Flagg's Uncle Sam felt like a dynamic and exciting re-imagining of the character. Uncle Sam had always been portrayed as a folksy and friendly type, but under Flagg's expressive brush, America was to be shown as a handsome and robust figure. Whether it was through patriotism, thriftiness or vanity, the story goes that Flagg decided to use himself as the model for this new rendition of Sam. According to Meyer, the illustrator was acutely aware of his own good looks and was particularly proud of his shapely eyebrows. Ageing himself with makeup, a fake goatee and wearing the now-iconic hat, Flagg composed the image in front of a mirror, and thus Uncle Sam was made in Flagg's own image.

As the years passed, the illustrator began to look more and more like his original creation – and he continued to use himself as the model for several more posters – even occasionally posing for press photos in full Uncle Sam garb (below). It was a decision that won him the admiration of Franklin D. Roosevelt, who praised his resourcefulness and noted that his methods suggested that he had "Yankee forebears".

After the First World War, Flagg returned to working with a number of advertising and publishing clients. Despite the fading lustre of illustration's “Golden Age”, he continued to have success – particularly in magazines where nearly every major publisher wanted to work with him. He drew caricatures of movie stars, illustrated a handful of books and even wrote an autobiography. When America returned to war in 1941, his posters were suddenly back in demand. Millions more of his iconic Uncle Sam poster were printed, and the image continued to be just as effective.

Unfortunately, as the post-war era dawned, the world had changed too much for Flagg. Illustrators needed to work fast to adapt to the changing world of mass markets and colour photography, and Flagg found that his style of illustration was quickly falling out of fashion. Drifting into obscurity, he found himself trapped in a world that he deplored. His vision was failing – and his health had left him incapable of enjoying the playboy lifestyle that he had once so much adored. “I really died twenty years ago” he noted, “but nobody had the nerve to bury me”.

James Montgomery Flagg died on May 27, 1960, and was interred at Woodlawn Cemetery in The Bronx. Despite once being one of the most celebrated figures in American culture, only twenty people came to pay their respects. It was a sad end for a once much-loved figure. Yet today, his poster remains one of the most iconic images of the twentieth century; a lasting icon that symbolises the power of patriotism. This, I feel, is an achievement that even Flagg himself could not bemoan.

The Portraits of John Singer Sargent
Flagg's great hero was the American painter John Singer Sargent (1856–1925). Arguably the greatest portrait painter of his era, Sargent had impressive technical skills, and it is not hard to see the influence that he had on the illustrator.

Ludwig Hohlwein's Heroic Realism
It was not just the Allied Powers that produced propaganda during the wars, and despite his controversial output, it would be remiss not to mention the work of German artist Ludwig Hohlwein (1874-1949). A talented artist, Hohlwein was a member of the Nazi party and designed posters for the NSDAP, the Nazi People's Welfare and the 1936 Olympic Games.

The Portraits of Everett Kinstler
An admirer of Flagg's work since early childhood, Everett Raymond Kinstler (b. 1926) went on to become a devoted friend of the illustrator. Kinstler's 1952 portrait of the illustrator feels like a truly fitting tribute to a man who played such an influential role in this young artist's life.