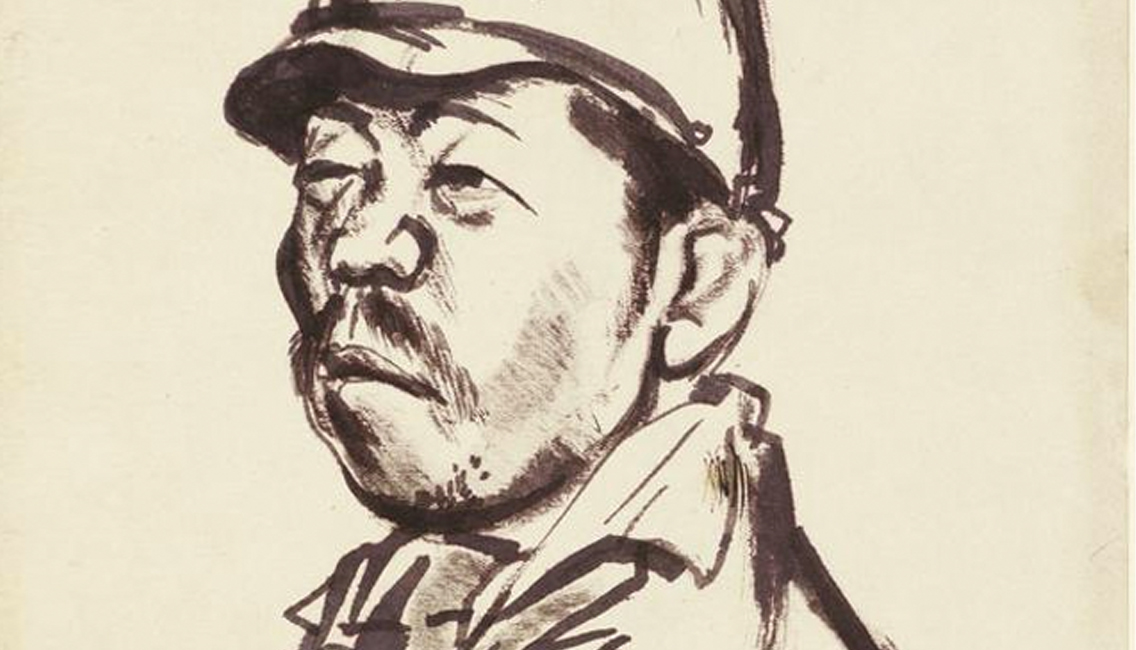 The War Drawings of Ronald Searle

On August 28 1945, two planes flew towards Changi Gaol in eastern Singapore. The building had originally been designed as a jail for civilians, but, at this point in time, it was being used as a prisoner-of-war camp. Inside, the Japanese army was holding some fifty-thousand Allied soldiers. As the planes began to move in on their target, they lowered their altitude and, as they made their first flyover, they began to disperse large numbers of leaflets into the air. In the courtyards below, hundreds of Allied soldiers were gathered. They had heard rumours that the war had ended in May, but these leaflets brought the first official confirmation that the war was indeed over – help was on its way.

It took an additional month for support to finally turn into action – with British ships departing Singapore on the 28th of September. On board were hundreds of passengers, each marked by the ineffable horrors of their wartime experience. They had survived in the face of one the most savage and gruesome inhumanities of their time, and yet, these were somehow the lucky ones. Few British POWs had managed to withstand the horrors of the infamous Changi Gaol, but one such survivor was a twenty-five-year-old art school dropout called Ronald Searle (1920–2011).

Born in Cambridge in 1920, Searle is thought of today as one of the world’s foremost illustrators – remembered fondly for his whimsical illustrations of Nigel Molesworth, his political cartoons for papers like Le Monde and his wickedly funny collection of St Trinian's books. A promising artist from a young age, Searle's artistic aspirations were stalled at nineteen when he realised that the arrival of the Second World War was imminent.

Enlisting in the Royal Engineers in 1939, Searle spent several months training in Britain – first as a camouflage artist in Norfolk and then later in the small Scottish town of Kirkcudbright. Eventually, in October 1941, he departed for Singapore.

Upon arrival, Searle found himself almost instantly rushed to the frontline. He described his brigade as being “unfit, unacclimatised, unenthusiastic and untrained in jungle warfare”. Within a month, Singapore had fallen, and Searle had become a prisoner to the Japanese. Sent to the Changi Prison Camp in the eastern region of the old British stronghold, the prisoners found conditions to be bad, and its General had little regard for the rules of the Geneva Conventions.

Searle passed his time in the camp sketching and drawing pictures before finally deciding to start a secret POW magazine with a couple of other inmates. Survivor appeared once a month for five months and was a great success. He later jokingly described the publication as having a 'print' order of five copies and a total readership of fifty-thousand. He illustrated every page up until the day that he drew one British General in a not so flattering light, and the whole publication had to be put to rest quickly. The incident earned Searle a reputation for being rather mischievous, and when the Japanese turned to the higher-ranking officers to select who should be drafted out for labour, Searle's name found itself high on their list.

After fourteen months at Changi Prison Camp, the illustrator was sent north to work on the notorious Siam-Burma Death Railway. Here he was forced to break rocks for up to eighteen hours every day. He endured violent labour conditions and sustained many of the grimmest horrors that the jungle could inflict upon him. He suffered dysentery, beriberi, ulcerated skin and repeated bouts of malaria. Yet – through all of this – he held an unwavering desire to document the things he saw: “Suddenly, you lose your liberty and you want to record what's going,” he said in 2010, “[...] suddenly, you're given a purpose.”

Compiled together in 1986 as a book called To the Kwai and Back, these drawings provide a unique and hugely important account of the Second World War. In it, Searle writes about his experience – presenting an astonishing record of the cruelty, depravity and savagery of the war. His images carry a striking immediacy, and it becomes overwhelming to consider the conditions in which they had been made.

For Searle, these drawings were by no means an exercise in catharsis – “circumstances were too basic for that” he remarks in his book. They were – instead – a means to show the world the vulgarity and evilness of a place that one man had found himself trapped.

Yet, it is also clear that these drawings were a necessity for the young artist. In his book, he describes his desire to draw as a “mental life-belt” – something to hold on to just to keep afloat. “Frequently, it seemed a stupid waste of what little energy I had left to continue drawing for no other reason than that of carrying out my self-appointed task of recording what I could of what was going on,” he wrote. “It was often very hard to force myself to continue when all I wanted was to forget and escape into the reality of sleep”.

It was while captured by the Japanese that Searle met the Australian writer Russell Braddon (1921–1995). In Braddon's hugely successful memoir – The Naked Island (1958) – the author writes of Searle's unwavering perseverance. In one example, he writes of how the illustrator fell ill to a skin disease while at a base in Kan’buri. Dysentery was ravishing his body and everyone presumed that it was only a matter of time before death would take him. Lying in one of the camp's beds, Searle drifted in and out of consciousness and yet, each time he would wake from his coma, he would crawl upright and begin to draw. Though naturally left-handed, Searle would, instead, draw with his right hand because his left had become so inflamed with ulcers. Many had felt that his hand would have been amputated. Yet Searle's constant resilience persevered.

After seven months of hard labour, countless deaths and gruesome illness, Searle was sent back to Changi – this time to the confines of the horrifically overcrowded Changi Gaol. Originally constructed to accommodate six hundred criminals, by May of 1944, it was holding five thousand POWs. So bad were the conditions at Changi – that ninety-five percent of all inmates never survived.

Despite these horrors, Searle continued to draw in the same calm and measured way he always did. Perhaps the most remarkable part of this was his ability to do so while still managing to keep the vast majority of his drawings hidden from the enemy. On several occasions, he would resort to stashing his drawings under the beds of cholera victims – in the hope that a fear of the disease would keep Japanese soldiers away from his work.

Had any of these drawings been discovered they would have almost certainly cost the young artist his life. As a POW, he had travelled thousands of kilometres through the Far East and had managed to do so while still keeping his drawings a secret.

Within the prison, Searle gained more and more access to supplies. Every prisoner had a pencil, and each one of them had brought a book. Searle would sell drawings in exchange for cigarettes and then trade those cigarettes for paper. It was an odd circle of exchanges, but one that must have helped pass the time and keep spirits up.

Reading Searle's book is a reminder of the importance of positivity. It is a lesson in the necessity for trying to find a sense of purpose in every situation – no matter how grim and despairing it might be. Searle argued that his sense of purpose came from a desire to keep a record of the brutality that existed during the war. Braddon, on the other hand, wrote that the illustrator's only interest “lay in training himself to be an artist so that when the war ended he might make his mark in England”. In truth, his motivations were no doubt formed by both of these ambitions.

Searle survived sixteen months in Changi Gaol and then spent almost another month at sea. On October 25, 1945, he eventually disembarked at Liverpool. In his possession were roughly three hundred drawings that spanned the last four years of his life. In that time, his whole world had been changed. His understanding of what mattered in life had become reshaped and remoulded. He was only twenty-five years of age when he returned from war, and, in many ways, he still had a whole life in front of him. As history would prove, it was a life that he would live to the full.

You can purchase To the Kwai & Back here

The full archive of Searle's war drawings is kept at London's Imperial War Museum. A digital archive of it can be viewed online here.

The pen and ink drawings of George Grosz
Ronald Searle first encountered the work of German artist George Grosz (1893–1959) while still a teenager growing up in Cambridge. His work was such an inspiration to the young artist that he even took the book with him when he joined the army. Grosz is best known for his caricatural drawings and paintings of Berlin life in the 1920s. It is easy to see the role that his work played during Searle's early years.

The POW Artists of the Burma Railway
Searle wasn't the only prisoner recording his experience of the war. Indeed a small yet impressive collection of artists also documented their time in the East, including artists Des Bettany (1919–2000), Jack Bridger Chalker (1918–2014), Philip Meninsky (1919–2007) and Ashley George Old (1913–2001).

The cartoons of Gerald Scarfe
The work of Ronald Searle was a great influence on the young Gerald Scarfe (b. 1936) and it's clear to see this in his work. Known for his editorial cartoons in publications like The Sunday Times and The New Yorker, Scarfe may best be known for his collaboration with the rock group Pink Floyd. You can read more about this collaboration in an earlier essay on this site.