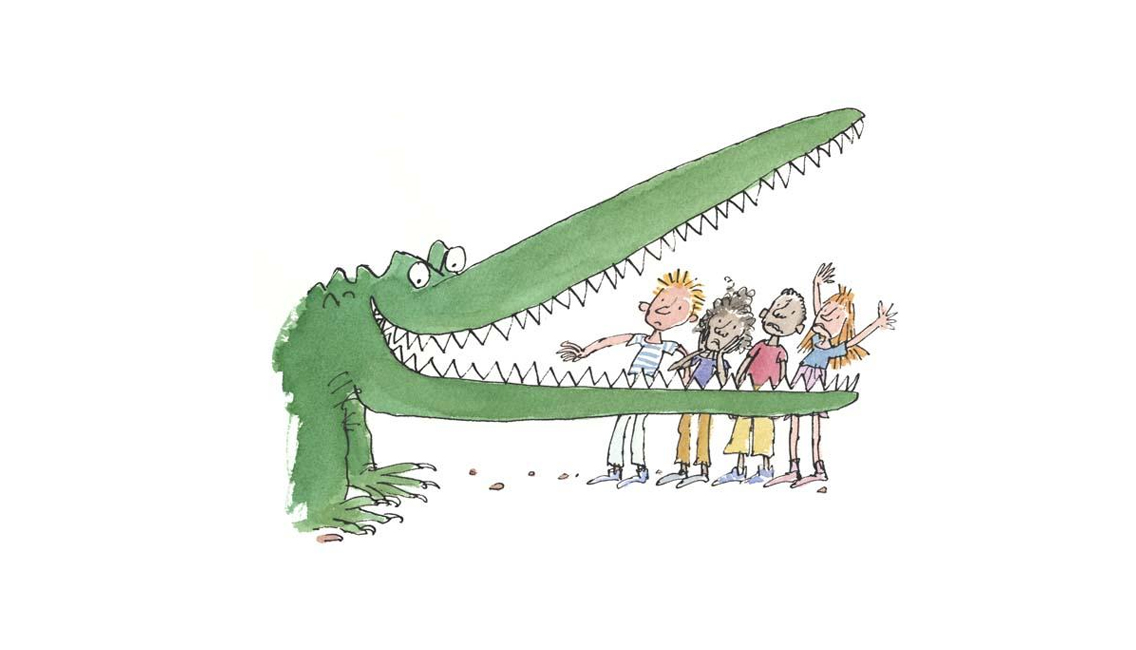 Quentin Blake, Roald Dahl and the Enormous Success of a Crocodile

With well over three hundred books to his name, there is a strong chance that the work of Quentin Blake (b.1932) has, at some point, been a part of your life. Arguably he is Britain’s best-known illustrator. His work has been enchanting, inspiring and enriching lives ever since he first began working in the early-1960s. Whether he is drawing with a marker, a reed pen, a Waverly nib, or even a bird’s feather – his style is instantly recognisable. His sharp lines seem to exude an inescapable energy, and his work seems to encapsulate all that is good about being young.

For many, it is his work with the writer Roald Dahl (1916–90) that he is best known. Today, it is almost impossible to think of one without the other, and yet it wasn’t until Dahl’s ninth book that they first began their collaboration. Looking back on it now, it feels almost strange to think it took so long for their partnership to begin. Blake’s energetic pen fits perfectly with the spirited nature of Dahl’s writing, while his angular lines fit effortlessly with the sharp and acerbic nature of the author’s voice.

Yet while Blake’s work boasts an energetic scratchiness (similar, say to that of Gerald Scarfe, Ralph Steadman or even Ronald Searle), his illustrations can’t escape the unwavering warmth of their creator. Without knowing his work, one might assume that the innocent nature of his illustrations might detract from the crueller elements in Dahl’s writing – and yet the opposite is true. The childlike expressiveness that these pictures hold seems to become somewhat sinister when they sit alongside Dahl’s text. It’s a strange kind of magic that brings out the best qualities in both the writer and the illustrator.

Perhaps this duality is seen best in their first collaboration. While Dahl had published illustrated books before, it wasn’t until The Enormous Crocodile (1978) that the writer attempted to create his first picturebook. The project had grown from a suggestion made by Tom Maschler – who, at the time, had been the editorial director at Jonathan Cape. Maschler felt that a picturebook might suit Dahl’s style of writing – and so, the author gave it a shot. Once the text was complete, a search for a suitable illustrator began. They invited a few different people to try out for the job and eventually settled on Blake. While the origins of their first collaboration may sound ordinary, the resulting work was far from mundane.

Nearly all of Dahl’s children's books feature animals, yet it is through his menacing crocodile that we see him at his beastly best. The opening page describes the protagonist as having a grin that housed “hundreds of sharp white teeth,” and it doesn’t take long for Dahl to let us know that these are designed specifically for the eating of juicy little children.

“It was very interesting as a task to do” explains Blake, looking back on his work with the book. “It’s a kind of caricature and that’s where Roald and I met very much. In a sense, what he wrote was like what I drew in the degree of exaggeration and comedy in it. But it was a bit fiercer.”

‘Fiercer’ was certainly one word to describe this creation. The book's crocodile stands as a sort of embodiment of evil. There is a darkness in this book that Blake hadn't shown in any of his previous materials. Yet, through the demands created from such a collaboration wonderful creations – such as this – can be carved out.

For many young readers, the playful darkness seen in these types of stories is what captures their imagination. When speaking in a BBC documentary about his life and work, Dahl suggested that “if you had a book full of nothing but nice people it’d be awfully boring”. As a writer, he took great pleasure in bringing readers to gruesome places. He noted that he was always “quite prepared to have [characters] killed in the most grisly possible way” – suggesting one example of “having little boys from Eton pulled out of the windows and eaten by giants”. For Dahl, all of this was perfectly acceptable – as long as there was a “whopping great laugh at the same time”.

What stands out for me in Blake and Dahl's partnership is their ability to find a well-considered sense of harmony. Balance is crucial in all creative disciplines but, within visual storytelling, it is particularly demanding. To tell a good story through a picturebook you must accomplish many tasks. The book needs to balance its words and pictures, find a suitable flow and rhythm, tailor its language to suit the literacy of its audience and accomplish all of this within a limited amount of pages.

Dahl himself was quite open about acknowledging just how much he struggled in writing a first-rate illustrated book. “I believe I managed to achieve this once with The Enormous Crocodile,” he wrote in The Roald Dahl Treasury (1997) – acknowledging the help of Blake’s “marvellous illustrations”. After completing this book, he attempted to set aside a week or two each year to try and start another one but “on each occasion” he says, he had “given up in despair”.

Dahl was always quick to point out how integral Blake was to his work. The pair followed The Enormous Crocodile with the novel The Twits in 1980 and then George’s Marvellous Medicine in the following year. Perhaps somewhat surprisingly, their communication on these projects was quite slight. It wasn’t until they worked together on The BFG in 1982 that their friendship properly took off. Following this came The Witches (1983) and then a collection of illustrated poems called Dirty Beasts (1983).

In 1985 they collaborated once again on what would be their only other large-scale picturebook: The Giraffe and the Pelly and Me. This project started out with Dahl asking Blake if he might like to work on a book that featured a giraffe, a pelican and a monkey. It was Blake’s enthusiasm for drawing these animals that encouraged Dahl to find a story that could do justice to Blake's work. Despite a near-endless run of rewrites and revisions, Dahl eventually found a narrative and created the much-loved book.

Yet, for Blake, this type of process is rare. He often states that his main collaboration is not with the writer but with the text. “What you do first of all is collaborate with what they have written,” he told Desert Island Discs in 2006. “It’s no good saying ‘what shall I draw?’, you have to make your commitment to it.”

Perhaps it’s through this sense of commitment that Blake has managed to successfully maintain one of the most prolific and loved careers in illustration. When Dahl passed away in 1990, Blake was so familiar with his late friend's work that he returned to illustrate the author's first six children’s books.

Blake’s dedication to his own sense of vision has led him on a journey that has covered thirty-five of his own books and brought about a near-countless array of awards and collaborations. His resolute love for drawing shines through everything he does – whether that's creating murals for hospitals or championing literacy as Britain's first Children's Laureate (1999–2001).

Over the last few decades, he has worked tirelessly to promote the value of illustration. In Ghislaine Kenyon's 2016 Blake biography, she describes how one of his big life intentions has been “to encourage critics and other writers, as well as museum and gallery curators, to take illustration more seriously.” She expands on this by noting how Blake wishes to “foster public discourse about it, to find a critical language for it; to acknowledge its place in the history of art and to show how this most available art form can play a vital role in everyone’s visual and emotional education.”

It's an extraordinarily ambitious intention, and yet – now in his eighties – Blake continues to champion the art form. As one of the foremost illustrators of the twentieth century, he has been the perfect advocate for developing such progress. His promotion of illustration can be seen, not just through the work he creates, but through his involvement with festivals like The Big Draw and his role in establishing a dedicated gallery for illustration in the form of London's House of Illustration.

Blake's collaboration with Dahl has given him an enduring legacy and, with this profile, he has worked passionately to help shape the future of his discipline. His work has inspired generations of young creatives, and his dedication to illustration has helped the art form be taken that little bit more seriously. Long may his legacy continue.

You can find a copy of The Enormous Crocodile here.

Biographies and Books
If you're new to the world of Quentin Blake and Roald Dahl then The Roald Dahl Treasury (1997) may be a good introduction. For those interested in the life and work of Blake, then Ghislaine Kenyon's biography Quentin Blake: In the Theatre of the Imagination (2016) is a great place to start. Blake himself has also written two books about his practice, Words and Pictures (2000) and Beyond the Page (2012); both of which come highly recommended.

The illustrations of André François
If you're a fan of Blake's free-spirited, anarchic line, then you'll no doubt love the work of the French illustrator André François (1915–2005). Blake freely acknowledges how much François's work inspired him – the uninhibited manner in which both illustrators draw is a celebration of vibrancy. His 1956 book Les Larmes de Crocodile is perfect for any crocodile lover!

The illustrations of Ronald Searle
In 2012 Blake wrote a feature for The Guardian called 'My hero: Ronald Searle'. His playfulness, his striking use of line, and his cheerfully unruly style make it clear why Blake would be drawn to his work. Searle (1920–2011) was one of the world’s greatest satirical artists and is perhaps best remembered as being the creator of St Trinian's School (1946–52). Read more here.